How diverse is the habitat in Ulva Island-Te Wharawhara Marine Reserve and how is it changing?

Ulva Island-Te Wharawhara Marine Reserve protects parts of Paterson Inlet, which is the largest inlet in southern New Zealand outside of Fiordland. The inlet is a shallow flooded river system, with the deepest point only 45 metres. A combination of rocky reef, sand, soft mud and habitat-forming species (such as shellfish, kelp and sponges) support a rich biodiversity.

A 2014 survey of the marine reserve identified seven types of physical habitat (including sand, mud, shell-hash and rocky reef) and 14 types of biological habitat. The most common biological habitats were beds of shellfish, sponges and other filter-feeding animals, fine sand with burrowing animals and meadows of small red seaweeds on the sea floor.

The habitat diversity was assessed by comparing the actual diversity with the expected diversity for this type of cold water habitat. The expected range of habitats are found in the marine reserve and in surrounding areas of Paterson Inlet, due in part to the minimal human disturbance the area has experienced in the past.

We are unable to report a trend for this measure because to date, only one assessment of habitat in the marine reserve has been carried out. 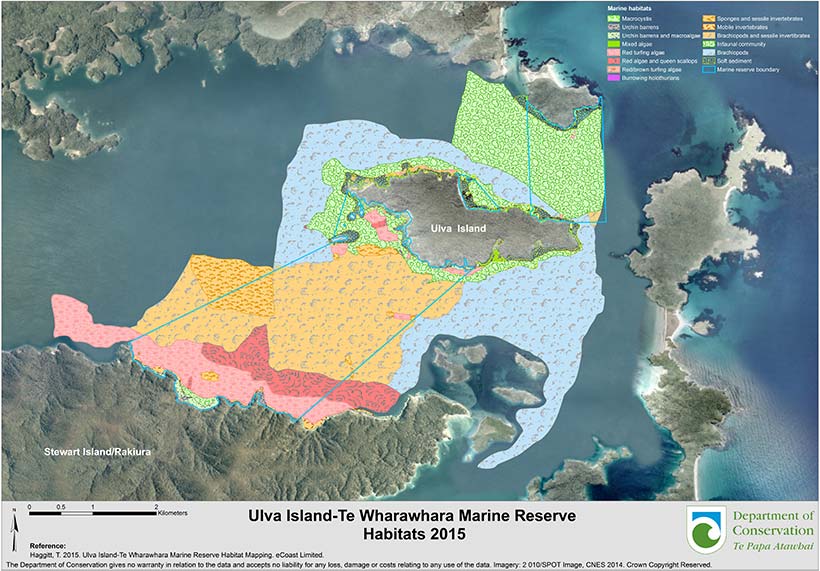 Open a larger version of this map (PDF, 615K) or a very large high quality version (JPG, 17,22K) that will take some time to download. 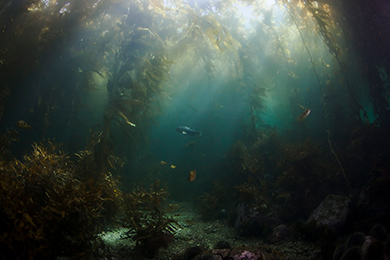 Giant kelp forests are a feature of the marine reserve
Image: Vincent Zintzen ©

Approximately 270 species of seaweed have been identified in Paterson Inlet, where they grow profusely. This is the greatest seaweed diversity found anywhere in New Zealand. Strong seasonal patterns are also observed, with some seaweeds present only at certain times of year.

Large undersea forests of the giant kelp Macrocystis pyrifera are a feature of the marine reserve. In the relative shelter of the inlet, red seaweeds attach themselves to small pieces of shell or gravel on the soft sediment seafloor, or form free floating meadows. Seaweeds provide three-dimensional habitats for other organisms.

Many of the inlet’s seaweed species are still to be named and described scientifically. 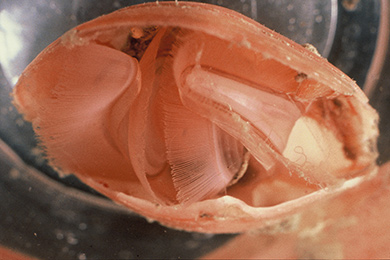 Brachiopods, sometimes called lampshells, are an intriguing type of shellfish. Like mussels, they have two shells but these are arranged top and bottom instead of left and right. Brachiopods are an ancient species – they have been found in fossilised rocks up to 500 million years old.

Paterson Inlet is one of the few places in the world where brachiopods grow on the sea bed in large numbers in water that is shallow enough to be accessed by divers.

Brachiopods are sensitive to changes in water quality and activities that disturb the seabed, such as trawling. Their presence in the marine reserve is an indicator of good ecosystem health.