October 2015
A report on the translocation of 69 South Island robins and 80 mohua that were released on Coal Island in Preservation Inlet, Fiordland.

In July and September 2015, 69 South Island robins and 80 mohua were released on Coal Island in Preservation Inlet, Fiordland. The translocations were conducted by the South West New Zealand Endangered Species Charitable Trust, also known as the Coal Island Trust, in partnership with the Mohua Charitable Trust, Ngai Tahu, Highcountry Helicopters and the Department of Conservation.

Mohua were reportedly formerly present on Coal Island, and were widespread in the Preservation Inlet area. The island is free of rodents, and is currently maintained to zero stoat density, with the exception of one or two animals which may reach the island during plague years. This translocation increases numbers and sites for nationally vulnerable mohua, and restores the ecological values of Coal Island.

Robins were formerly abundant on Coal Island, and widespread through Fiordland. They are still present in low numbers around Kisbee. Robins have been successfully translocated to Pigeon, Pomona, Chalky and Indian Islands. While robins are not listed as a threatened species, they are a key part of the forest ecosystem.

The Coal Island restoration plan recommends translocations of mohua and robins as soon as is practical.

Coal Island, Preservation Inlet, Fiordland National Park, (1189 ha) is located at the seaward entrance of Preservation Inlet, and is, at its nearest point, approximately 400 m from the mainland near Puysegur Point. It is separated from the mainland by a 400 m to 1 km wide channel of water known as Otago Retreat, which extends along the entire eastern side of the island. The island has a flattish area on its northeast side (Moonlight Flat) that rises steeply to a ridge with the highpoint of 251 m. Coal Island’s principal habitat type is mixed podocarp-broadleaf forests, with a protective fringe of salt-tolerant coastal shrubs in places.

At 1189 ha, Coal Island is large enough to provide habitat for self-sustaining or managed populations of a wide range of threatened species. Coal Island provides a wonderful opportunity for collaboration between DOC and a charitable community trust and for meaningful contributions by volunteers, supporters and sponsors from the wider public towards achieving the restoration of natural flora and fauna of the region and for selected threatened species.

There are 132 stoat traps on Coal Island, with a total of 117 traps on the adjacent mainland. Since the initial knockdown of stoats in 2006, ten stoats were caught following a mast event in 2010. Since then one stoat has been caught in 2014 and two stoats in 2015.

The release populations will require the ongoing long-term stoat control on the island and mainland to persist. 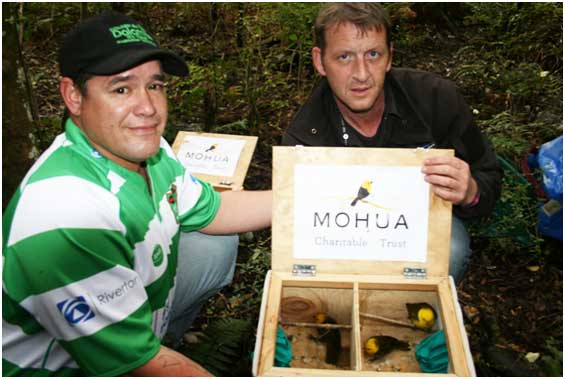 Four teams of two experienced mohua catchers caught mohua on Chalky Island over two days in mist-nets, using calls to entice them in. They were colour banded: metal band on the left leg, pink on the right and kept in purpose built boxes until released the same day via helicopter.

Robins were caught using hand nets, luring the birds in with meal worms. Birds were caught on Anchor Island in Dusky Sound. Robins were banded: metal band on the left leg, yellow band on the right leg and kept in boxes until they were released either by helicopter or boat the same day.

Thank you to the Coal Island Trust for their hard work and dedication in restoring Coal Island. Thank you to the Mohua Charitable Trust for sponsoring the mohua translocation. Thank you to Highcountry Helicopters and Dale Green for support. Thank you to Ngai Tahu for assistance and support with the translocations. Thanks to all the mohua and robin catchers: Flo Gaud, Johan Groters, Joyce Kolk, Katherine Jenkins, Clement Lagrue, Kat Manno, Shane McAusland, Marion Rhodes, Warren Simpson, Jason and Maddie van de Wetering, Ray Willet, Megan Willans and Pete Young.