We maintain a database of incidents based on reported events. Incidents include dead or stranded Hector’s and Māui dolphins and those caught by fishers.

The data is updated and released every quarter.

Reports may be of dolphins:

Quarterly updates are posted about Māui and Hector's dolphin incidents in early May, August, November and February each year.

Data on observed captures will generally be reported here only in the quarterly report after the quarter that the incident occurred in. This is to align reporting and maintain the integrity of government fishery observer programmes.

Where reports come from

Our work to learn more about the threats to these dolphins relies on prompt reporting of dead dolphins by members of the public. The database is biased to areas visited frequently by people, so tends to have more reports from areas that have higher visitor numbers. The database also relies on reports from fishing vessels that may have caught dolphins during their fishing activity – this is a legal requirement.

Currently, investigation of all Māui and Hector’s dolphin mortality includes:

What the database contains

The database contains a variety of information about each dolphin, including its sex, size, where it was found, any background information, where relevant, about the incident and information collected during the necropsy.

The database also contains results from any DNA analysis done. This analysis can provide genetic sex and haplotype information and is required to definitively determine between the Hector's and Māui dolphin subspecies. Haplotypes are portions of DNA that are only passed on by females, so each dolphin has the same haplotype as its mother. Haplotypes are assigned letters of the alphabet. There are 20 haplotypes in Hector's dolphins, and one that is unique to Māui dolphins (G). 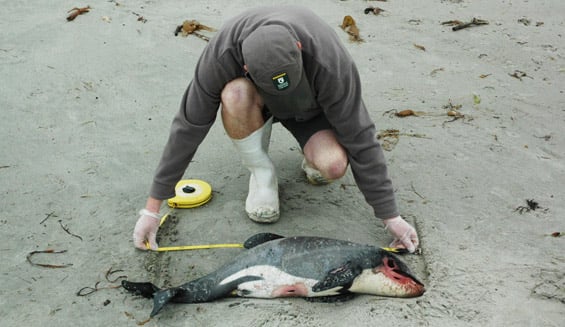 Hector’s dolphins are one of the world’s smallest dolphins. They are mostly found around the coast of New Zealand’s South Island.

Our work with Hector’s and Māui dolphin

Our work with these dolphins is managed under the Hector’s and Māui Dolphin Threat Management Plan.