The tracks and routes in the Stafford Bay area can be challenging and are recommended for fit and well-equipped trampers.

Dogs with a DOC permit only. Contact the relevant DOC office to obtain a permit.
Map currently unavailable.

The track initially climbs steeply away from the road until it joins a historic track, which once formed part of the road. Follow this well-marked tramping track to the Smoothwater River. 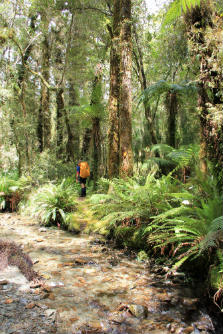 Beyond the Smoothwater River junction the track becomes a route - backcountry experience and navigation skills are essential. Follow the Smoothwater River upstream for about 20 minutes, crossing as necessary until Kakapo Creek (the first major creek) flows in on the true left. Look for the large orange marker here.

The marked track goes up Kakapo Creek, crossing it several times as well as using the creek bed as the route. After about an hour, the track veers away from the creek to the right and starts to climb to Stafford Saddle. From the saddle, the route sidles before dropping, steeply at times, to a creek. Follow the creek downstream; it may be easier to follow the true left bank in places due to windfall trees in the creek bed.

The ground levels out shortly before the creek meets the Stafford River. Follow the river downstream, crossing where necessary until markers on the true left mark the short track to Stafford Hut, which is located 200 m upstream of the beach.

Alternative route for experienced trampers only 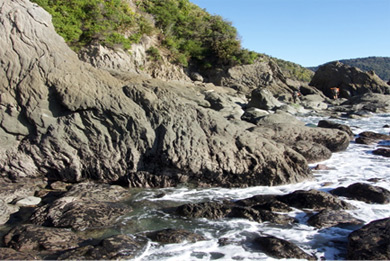 Warning: Due to the steep coastal terrain and numerous rocky and slippery sections, the majority of this route is unmarked and should only be attempted by people with a high level of backcountry experience and navigation skills. This route is only possible starting 2 hours before low tide from Smoothwater Bay and only when sea conditions are calm.

Follow the track from the car park to Smoothwater River, which takes about 45 minutes. Head downstream along the bush track that follows the Smoothwater River. Alternatively, if the river is low you can walk down the river, crossing where needed. It should take around 1.5 hours to reach Smoothwater Bay.

From Smoothwater Bay the track becomes a route. Head south to Stafford Bay - there is a difficult, rocky bluff section prone to sea surges about five minutes after leaving Smoothwater Bay, which requires fording coastal pools. Further down the coast there are two very steep headlands either side of Homminy Cove that require great care.

Once you have crossed both headlands continue south along the coast until you reach Stafford River. Stafford Hut is 150 m up the river, on the true left.

Warning: Do not attempt this coastal track in the reverse direction. If the tide or sea conditions are not suitable you are likely to get stranded along the coast.

Jackson Bay is 51 km south of Haast along the Haast-Jackson Bay Road.

The route to Stafford Bay starts at a small car park approximately 500 m before Jackson Bay. 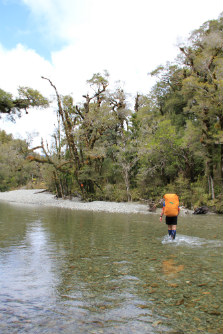 Experience and conditions: This route is suitable for well-equipped and experienced backcountry trampers and climbers only.

The time given is a guide only and will vary greatly with fitness and weather conditions. Tramping in this area is very demanding and you should allow plenty of time to reach your planned destination.

Hazards: Flooded rivers, rockfall, steep grades, coastal travel/tidal and rouge waves. This trip should not be attempted when it is raining, rain is forecast or the river is running high. The coastal route is only possible within 2 hours either side of low tide.

The route to Stafford Bay crosses rivers and numerous creeks, which all flood quickly during rainfall. Do not attempt to cross flooded rivers and side streams – wait until water levels have dropped. This route should not be attempted in poor weather.