Located in the Waikato region

Visit the Whareorino Conservation Area – the largest, and one of the most valuable, forested areas in the western King Country.

Recreational hunting is a popular pastime in Whareorino, and the upper reaches of the Awakino River hold some of the best fly fishing waters for trout in the North Island.

Find things to do and places to stay Whareorino Conservation Area

Whareorino Forest is the largest and one of the most significant forested areas in the western King Country. It is dominated by the Herangi Range.

Whareorino features tawa, hinau, kamahi, rewarewa as well as podocarps and is particularly special for its range of vegetation, from coastal and lowland vegetation types to subalpine and montane.

Its proximity to the west coast provides an unusually cold and moist climate. At the top of the Herangi Range, 600–800 m above sea level, the ridges are covered in low scrub and kaikawaka along with neinei, pepperwood and divaricating shrubs interspersed with areas of cushion bog. This vegetation is sub-alpine and uncommon in the King Country.

It is home to a variety of New Zealand birds including falcon, grey warbler, tomtit, kereru, riflemen, bellbird, whitehead, and in summer, long-tailed cuckoo. There have also been occasional sightings of kaka, kiwi and kokako. 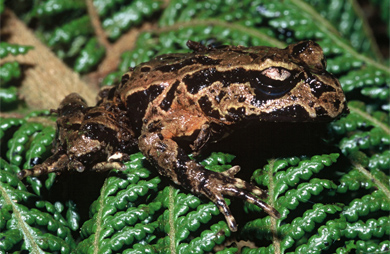 The spectacular virgin forest is home to a wide range of threatened species including the bush falcon, Archey’s and Hochstetter’s frogs and long-tailed bats.

Long tailed bats live here also and you may see them feeding at dusk around the macrocarpa trees at Leitch’s Hut.

Two species of native frog are found in Whareorino Forest. The critically endangered Archey’s frog is found in damp areas at high altitude of the northern Whareorino Conservation Area. The more widespread Hochstetter’s frog lives along streams and creeks throughout the forest.

Little is known about the pre-European history of the area. The forest was isolated for many years because of land wars in Waikato and Taranaki, and was first surveyed in 1902. Soon after, eight farms were established by settlers inside the boundaries of what is now Whareorino Conservation Area. Surveyed roads were never put through the forest, making access difficult. Three farmers did not return after World War I, while others eventually abandoned their farms or sold them to the Forest Service (later DOC).

The most isolated farm belonged to Sam Leitch. The land he cleared (Leitch’s Clearing) and the macrocarpa and eleagnus hedge he planted remain. Sam Leitch’s whare is believed to have fallen down in the 1950s. In 1994 a DOC hut, Leitch’s Hut, was erected next to the old whare site.

Whareorino Conservation Area lies 30 km southwest of Te Kuiti. It is dominated by the Herangi Range, of which Maungamangero (810 m) is the highest point, but gets its name from Whareorino Peak, which is located on private land.

Chytrid fungus a disease affecting frog survival has been found in the Archey's frog population in Whareorino and as a result a number of tracks in the forest have been closed to protect further infection in high risk areas.

Dogs and owners are welcome to use the tramping tracks throughout the conservation area for exercise. Dogs must be under control at all times and you will need a dog control permit from DOC.

Because of the steep terrain and heavily forested nature of Whareorino, trampers and hunters should get the relevant topographical map, available at map shops, bookstores and at DOC.