Located in Tūrangi area in the Central North Island region

Follow the banks of the Tongariro River alongside farmland and through native bush and urban areas, and enjoy magnificent river views - it's an easy, mainly flat track with multiple entry points so a great option for children.

An easy, mainly flat track suitable for families and casual riders. It can be enjoyed in any direction, and started at a number of different points. This means shorter routes can be tailored to suit your particular needs.

There is only one major climb on the trail, up to the Tongariro River Lookout at the northern end of the loop – well worth the effort when you reach the top and take in the view of the river, set against the backdrop of the mountains in the Tongariro National Park.

From the high banks above the river, there are excellent views of the river’s calm pools and rippling rapids. Keep an eye out for trout or watch the fly fishing action - the Tongariro River is a world renowned fishery.

To complete the full 15 km loop without needing to cross busy SH1, start the trail at the Tūrangi i-SITE and use the underpass under the road – you'll join the trail at Taupahi Reserve.

Heading south you'll pass the Major Jones Bridge, then on through the Waikari Reserve and past the Tongariro National Trout Centre, before reaching the southern end of the trail at Red Hut Bridge.

Cross the bridge and come back along the Tongariro River Walkway on the far side of the river, towards the Lookout track and the SH1 bridge. Here there is another underpass to take, before following the mosaic pathway back to the i-SITE. 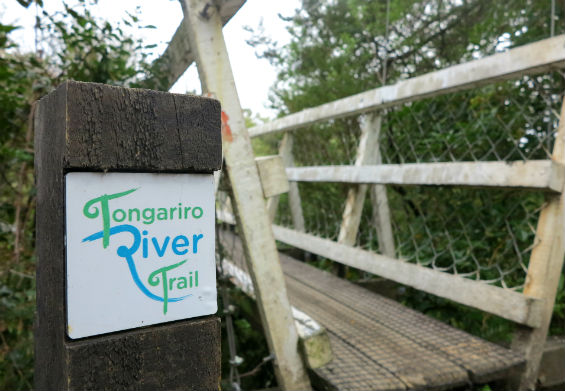 Follow the marker posts to complete the Tongariro River Trail.

There are many shorter options within the trail including the Waikari Reserve loop and the Taupahi Reserve track on the town side of the river, and the Lookout track and Tongariro Walkway on the far side.

The Tongariro National Trout Centre is also on route, which is a destination in itself. Take a walk along the river’s edge, learn about the fishery, or visit the whio creche and freshwater aquarium.

The trail is on the banks of the Tongariro River, which runs past the township of Tūrangi on SH1. There are many different parking options off SH1, at the end of Koura Street or at the Tongariro National Trout Centre.

This is a shared track popular with anglers, dog walkers and mountain bikers. Bikers give way to walkers.

The river is home to the endangered whio; keep dogs under control at all times, and on a leash during whio nesting season (August to October).

The track was completed as a loop with help from a local community group, to find out more visit the Advocates for the Tongariro River website.

The Fishery provides exciting river and lake fishing all year round. Anglers from all over the world test their skills against its wild rainbow and brown trout.

Nestled in a peaceful bush setting, the Tongariro National Trout Centre provides a peek into the world of trout at Taupō.