Mudfish/hauhau/waikaka/kōwaro are eel-like in appearance, with long, stocky bodies, thick slippery skin, and no scales.

They are found in swampy lowland habitats such as wetlands, pākihi, pools in swamp forests and slow-flowing streams and drains. Although the Chatham Island mudfish are an exception, as they live around the margins of peat lakes.

Mudfish vary in size between species, but adults grow to around 9–12 cm long. Some of the largest mudfish found have been up to 17.5 cm in length.

There are five species of mudfish in New Zealand, all of which have a conservation status of either 'Threatened' or 'At Risk' under the New Zealand Threat Classification System.

Northland/burgundy mudfish are found only in Northland, around Kerikeri and Ngawha— populations are confined to a small area within a 25 km radius of Lake Omapere.

Black mudfish are found in a variety of wetland types from Waikato to the far north.

Brown mudfish are the most widespread mudfish species in New Zealand, found in Taranaki, the lower North Island, and the West Coast of the South Island.

Chatham Island mudfish are the most recently discovered NZ mudfish species. So far, they are only known from three lakes and a stream on Chatham Island.

Mudfish have the ability to survive during times when there is no surface water—something most other fish can't do!

During these 'dry' periods, their metabolism slowly drops and they absorb oxygen through their skin. Mudfish can usually only cope with short periods of time without water, but have sometimes been known to survive for several months after surface water dries.

However, surviving during 'dry' periods is very hard on mudfish, and after water returns mudfish are often thin, in poor condition, and can have lower breeding success.

Mudfish need to have damp surroundings and cover, such as logs, tree roots and vegetation, to keep them alive during these times. When surface water returns, they become active again immediately—ready to swim, eat and breed.

Their ability to survive in these conditions means that mudfish can live in places other fish can't.

Throughout New Zealand, lowland wetlands have been extensively drained and modified. This has greatly reduced suitable mudfish habitat, and made remaining mudfish populations more vulnerable to threats.

One of the major threats to mudfish is habitat modification. Wetland drainage, land clearance, and modification of streams and drains decreases available habitat.

Drain clearance, especially machine clearance where spoil and weeds are dumped on the margins, destroys the habitat for mudfish living in these drains. Fish can also be killed as they get caught up amongst the spoil and weeds, and stranded on the banks.

Manipulating water levels to drain or pond wetland water can stress mudfish. Mudfish live in wetlands that have natural variations in water levels between seasons—extended dry periods may cause death, while artificial ponding of water can provide opportunity for other fish (e.g. invasive species, such as gambusia) to establish in the habitat, creating competition for mudfish.

Drought can threaten the survival of mudfish by completely drying up their habitat. As wetlands are modified, vegetation cleared, and natural variations in water level altered, natural periods of drought (which mudfish are able to cope with, provided damp refuges remain) can be exacerbated and lengthened, creating conditions too harsh for mudfish to survive. 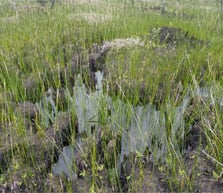 Wetland regeneration beginning after a fire 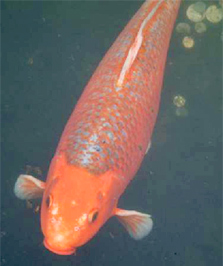 Koi carp: an invasive fish species that can alter the ecology of wetlands, prey on mudfish eggs and fry, and compete for food and habitat

Gold mining of pākihi terraces on the West Coast of the South Island is one of the biggest threats to brown mudfish in this region. These landforms are strongholds for mudfish on the West Coast, and mining destroys the habitat.

Nutrient input (for example, through run-off and leaching of nitrogen and phosphorus from the surrounding catchment) can degrade the water quality, potentially making it unsuitable for mudfish.

Fire can damage the habitat of Northland/burgundy and black mudfish, drying out and opening up the wetland to weed invasion. Northland wetlands are very susceptible to fire during dry periods.

Fires were once a natural process for these ecosystems, as they helped regeneration of plants. Today, other pressures have made wetlands more susceptible to, and less able to cope with, fires.

Weeds compete with native vegetation, can alter the ecology of the wetland, and may degrade the habitat.

Invasive fish species, such as koi carp and gambusia, can alter the ecology of wetlands, prey on mudfish eggs and fry, and compete with adult mudfish for food and habitat.

Gambusia are a particular threat to Northland/burgundy and black mudfish. They are present in many waterways throughout the upper North Island, and reproduce rapidly, colonising new habitats and establishing large populations within areas that these mudfish species occupy.

Competition with other native freshwater fish species can also be a threat to mudfish. They are rarely found in high numbers in habitats where other fish are present.

Many wetlands that support mudfish populations are on privately owned land. Populations are often found in small, isolated habitats, so even a small wetland can be very important.

Protecting and restoring wetlands, drains, water-races and swampy streams where mudfish are present will help to ensure the right environmental conditions and food resources are available, increasing the mudfish population.

If you think that a wetland on your property could be suitable habitat for mudfish, contact your local DOC office for advice about carrying out a survey.

Remember to always check council rules to see if the following actions are permitted, or if resource consent may be required.

Canterbury is home is to one of New Zealand’s most endangered fish species, the mysterious mudfish. Find out in this video what they are up to and what makes them so special.

Wetlands are areas where water is the primary factor controlling the environment and associated plant and animal life.