Northland mudfish grow to around 10 cm in length, and have a cigar-shaped body with thick skin and no scales. They are also known as burgundy mudfish because of hints of burgundy colouring around their gills and belly.

Northland mudfish grow to around 10 cm in length, and have a cigar-shaped body with thick skin and no scales.

They are also known as burgundy mudfish because of hints of burgundy colouring around their gills and belly.

Northland mudfish have a conservation status of Threatened–Nationally Vulnerable under the NZ Threat Classification System.

Adults are primarily nocturnal and can be seen at night, although they can be tricky to spot amongst the wetland vegetation. Younger mudfish are active during both day and night, and can sometimes be seen in shoals in open waterbodies.

Northland mudfish are only found in low-fertility wetlands, confined to a very restricted area within a 25 km radius of Lake Omapere. Their distribution ranges overlap with black mudfish (which are more common and can be found in a variety of wetland types from Waikato to the far north), although the two species do not live in the same habitats.

Northland mudfish are also known as burgundy mudfish because of hints of burgundy colouring around their gills and belly.

Northland mudfish are generally found in still or very gently flowing water in gumland and peat bog wetlands. The water is often tea coloured due to the presence of peat soils, and tends to be surrounded by dense vegetation.

Gumland wetlands form in areas that were originally kauri forest. The acidic leaf litter from the kauri trees causes a hard silica pan to form beneath the ground, preventing rain water from draining away. This means that the gumlands are often dry in summer and waterlogged in winter. 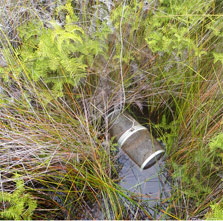 Two key Northland mudfish populations are at Ngawha geothermal wetland and Wiroa Conservation Area (adjacent to Kerikeri Airport). Both of these sites are gumland wetland habitats.

It is estimated that around 90% of New Zealand's wetland environments have been lost, so the habitats mudfish are found in are now very rare.

Conservation efforts for Northland mudfish have focused on surveying sites to determine the distribution of the species by finding new populations. 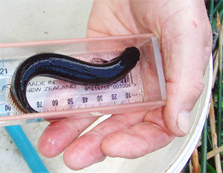 Several populations of Northland mudfish are monitored. Management actions such as fencing off and re-vegetating the wetland have been undertaken to protect these habitats.

The monitoring programme implemented by DOC is gathering information on how these populations respond to fencing, and the associated changes to the 'health' of their habitat.

Monitoring also helps identify the type of wetland environments that are the most favourable habitat for Northland mudfish. This knowledge can then help determine what other wetlands could be potential Northland mudfish habitat.