The ecology and behaviour of the Chatham Island mudfish is not well known. So far, it has only been found at four sites, so there is a risk that it could become extinct if those habitats were modified or destroyed.

Chatham Island mudfish have a conservation status of At Risk–Naturally Uncommon under the NZ Threat Classification System.

The Chatham Island mudfish was first discovered in 1994 by Charles Mitchell in Lake Tuku a Taupo. It was initially described as belonging to the whitebait (Galaxiidae) genus and thus named Galaxias rekohua.

Subsequent surveys by DOC uncovered three more populations - in Lake Rakeinui in 2001; in a small tributary of the Tuku a Tamatea river in 2006, and in Lake Rangatapu in 2007.

In 2004, the fish from Lakes Tuku a Taupo and Rakeinui were re-examined and found to have characteristics more typical of the mudfish (Neochanna) genus: eel-like swimming behaviour, an elongated cigar-shaped body, small eyes, long tubular nostrils, small paddle-shaped pectoral fins, and well developed caudal flanges. They were reclassified as Neochanna rekohua. Rekohu (meaning misty skies) is the Moriori name for the Chathams.

In 2005, a comprehensive morphological (form and structure) and molecular study of all the New Zealand and Australian mudfish species confirmed not only that the Chatham Island mudfish was actually a mudfish, but that it is most closely related to the Canterbury mudfish. Both share a common ancestor that must, at some stage, have been diadromous (i.e. spending part of its life cycle in the sea).

The Chatham Island mudfish is only known to occur at four sites on the Chatham Island, the southern tableland lakes - Tuku-a-Taupo, Rakeinui and Rangatapu, and a small tributary of the Tuku a Tamatea River. 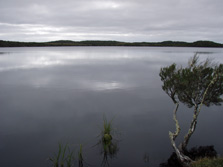 Lake Rakeinui. Click on image to view
panorama of lake

The lakes are surrounded by extensive wetlands and are all likely to be hydrologically connected to each other through these wetlands. Lake Tuku a Taupo is connected to the sea via the Te Awainanga River, and Lake Rakeinui by a small unnamed stream. It is unclear if Lake Rangatapu has a connection. There are possibly natural barriers in these waterways that restrict the upstream movement of other native freshwater fish species into the lakes.

The lakes are mostly vegetated with native grasses, trees and scrub on the bank side and some emergent aquatic plants. The bottom substrate varies from rocky to soft sediment and the water is darkly tannin-stained. The only other species reported to co-exist in the lakes are longfinned eels, which are known to predate on the mudfish. The lakes in which the mudfish are found are all privately owned, and part of Lake Rakeinui is protected within the South Chathams covenant. 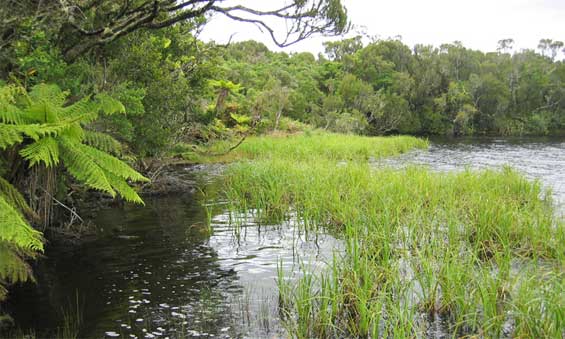 Chatham Island mudfish grow to an average length of 8 cm, although some individuals that are longer than 17 cm have been found. This makes them one of the larger species of mudfish in NZ, as brown mudfish are the only other NZ mudfish species that have been found at sizes this big

Little is currently known regarding the diet of Chatham Island mudfish. They likely feed on small, aquatic and terrestrial invertebrates.

The breeding habits of the Chatham Island mudfish are currently unknown, although they seem to mature at a young age with milt being observed in small males.

The main threat to the Chatham Island mudfish is habitat modification or destruction, such as wild stock disturbance and uncontrolled burning of land for grazing, but they would also be vulnerable from pest fish and pest plants if these were to establish in the mudfish habitat.

Other native freshwater fish may also pose a threat to the mudfish, through competition for food and habitat, or direct predation.

The Department has undertaken surveys on the Chatham Islands to locate new populations of mudfish and to monitor some of the known mudfish populations to ensure they are stable and doing well.

Extensive freshwater surveys have also been undertaken on Pitt Island but no mudfish were found.

Information collected during the surveys is to improve our knowledge of these fish, including their length and weight, maturity, health and diet (through collection of invertebrates in the area). Fin clips enable ongoing genetic analysis.

All of the southern tableland lakes are on privately owned land. The landowners have been generous and supportive of the survey work that the Department has been undertaking by providing access to these important sites.