Brown mudfish usually grow to 10–12 cm in length, but can grow as large as 17.5 cm. They have thick skin with no scales, and vary in colour from mottled light brown to almost black.

Brown mudfish usually grow to 10-12 cm in length, but can grow as large as 17.5 cm. They have thick skin with no scales, and vary in colour from mottled light brown to almost black.

Brown mudfish have a conservation status of At Risk–Declining under the NZ Threat Classification System.

Adults are not easily seen, as they are primarily nocturnal and spend most of their time amongst the leaf litter on the bottom of pools. Younger mudfish are active during both day and night, and may sometimes be seen swimming in areas of open water. Trapping using special 'Gee minnow' traps is the best way to find mudfish.

Brown mudfish are listed as 'At Risk, Declining' under the NZ Threat Classification System

Brown mudfish are the most widespread mudfish species in New Zealand, found in both Te Ika-a- Māui/North Island and Te Waipounamu/South Island.

In the North Island, populations can be found in lowland areas in Taranaki, Manawatu, the Kapiti Coast and Wairarapa. In the South Island they are found along the West Coast from Whanganui Inlet to Okarito.

Because of their widespread distribution, brown mudfish are known by more than one Māori name. The two most commonly used are waikaka and hauhau.

They are also found in slow flowing drains and boggy paddocks – places that at first glance might seem an unlikely place for a fish!

Brown mudfish found on the west coast of the South Island were the first mudfish species to be described and formally identified in New Zealand.

In the early days of European settlement on the West Coast, brown mudfish were frequently found in damp mud when clearing roads or digging up paddocks in areas that had previously been swamp forest – hence the name 'mudfish'. In some paddocks 'fish and chips' were literally being dug up, as brown mudfish were found in potato paddocks that had once been wetlands.

There are some reports of brown mudfish found in paddocks that had been drained for up to two years. This led to some interesting misconceptions.

Some people thought that mudfish had a 'dislike' for water, while others (after finding brown mudfish during trenching in paddocks) concluded that those fish found in puddles of water after heavy rain had 'fallen from the sky'! 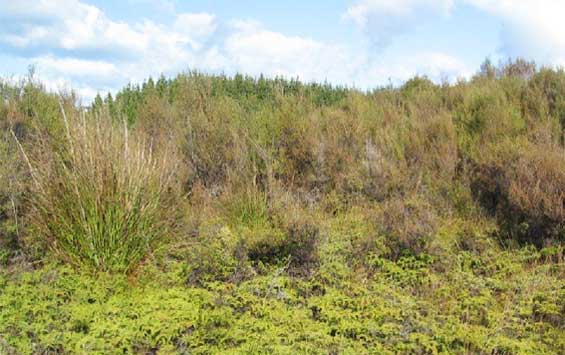 Pākihi terrace: home to brown mudfish on the West Coast