Paddling on the Whanganui River

Located in Whanganui National Park in the Manawatu/Whanganui region

Explore the scenic beauty paddling up the Whanganui River, a landscape of remote hills and bush clad valleys.


Watch videos of the Whanganui Journey

Distances between campsites and huts

Access points are at Ngāhuinga (Cherry Grove) in Taumarunui or further downstream at Ōhinepane (accessed from River Road SH43).

Travelling the upper reaches of the Whanganui River, you’ll pass through a mixture of farmland and patches of native bush. You’ll be in for some excitement as you shoot down rapids on this section of the river. Camp beside the river at Ōhinepane, Poukaria or Maharanui campsites. From here, you get the feeling of venturing into the heart of a rich and rugged landscape.

Many begin their river journey here—the scenic middle reaches of the river, featuring numerous waterfalls after heavy rain. Past Mangapapa Campsite, take a long loop around the Kirikiriroa Peninsula, pass the Tarepokiore (whirlpool) rapid and then the large overhang known as Tamatea’s Cave. Please do not enter the cave as it is wāhi tapu (a sacred place). Ōtaihanga Reach leads you to your overnight stop at John Coull and Campsite and John Coull Campsite.

You may see long-tailed bats fluttering overhead at dusk.

On this section, follow the river as it meanders through bush-covered hills, passing the mouths of the Tāngārākau and Whangamōmona rivers where they join the Whanganui. Perched high above the river, Manga-wai-iti is an attractive spot to camp or stop for lunch.

Continue your trip downstream to Tīeke Kāinga where you can examine the intricately carved pou whenua and learn about the history of Tīeke and the tikanga (protocol) of the marae.

Alternative accommodation option: For a more secluded night’s sleep, stay at Puketotara Hut. Opposite Tieke Kainga, this 1 hr and 30 min track takes you high up on the Matemateaonga Range where you will spend the night in podocarp splendour, with expansive views of the Whanganui River, the bush clad hills of Whanganui National Park and the volcanoes of the Central Plateau.

Side trip: Bridge to Nowhere

At Mangapurua Landing, where the old riverboats used to tie up, hop out of your canoe and take the 40-minute (one way) Bridge to Nowhere Walk to this poignant reminder of the Mangapurua Valley farm settlement, carved out of the bush and then abandoned between the two World Wars. Look out for cyclists—the track is also part of the Mountains to Sea Cycle Trail.

You’ll pass through the scenic gorge of the Manganui o te Ao River where it enters the Whanganui after its journey from the slopes of Mount Ruapehu. Ngāporo and Autapu rapids can provide plenty of excitement and perhaps a cool dip on a hot day. More exotic trees and farmland indicate you are getting close to Pīpīriki. Pass an eel weir on your left, shoot the Paparoa rapid and you will see the boat ramp below Pīpīriki village up ahead. 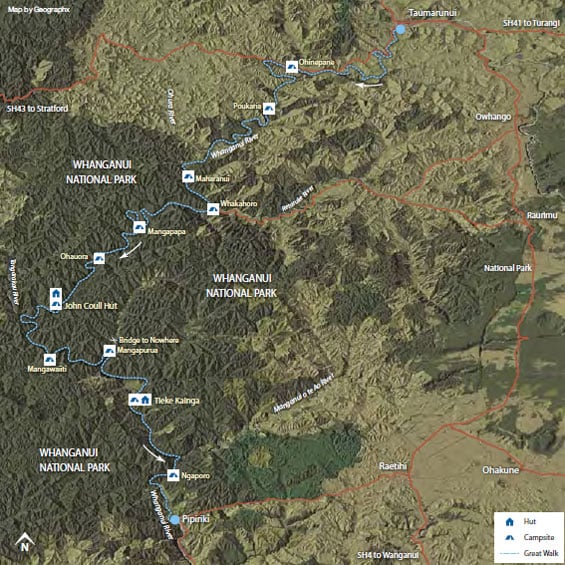 Fees are charged per person, per night to stay in huts or campsites on the Whanganui Journey. There are no fees for entry into Whanganui National Park.

Note there is a maximum number of nights you can stay:

Discounts are not available online. To receive the discount we need to sight your membership card and Backcountry Hut Pass, so please visit a DOC visitor centre in person. If you get a discount you won't be charged a booking fee.

Booking on behalf of others

Guided groups: To operate a commercial activity in an area managed by DOC, you need to apply for a concession (an official permit), in addition to any bookings you would need to make. Read more about concessions

To make multiple bookings for facilities/services on behalf of customers, you must obtain permission or an agent agreement from DOC. To do this, email: agents@doc.govt.nz 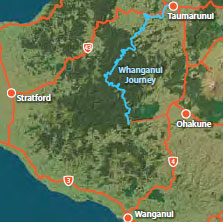 Location of the Whanganui Journey

Traditional entry or exit points for the Whanganui Journey are off SH4 at:

Once you are on the river below Whakahoro there is no turning back and no place to buy anything you may have forgotten.

Make sure you are properly equipped and well prepared. The weather in the Whanganui National Park is changeable and can be cold, wet and windy, even in summer. Check at a visitor centre for information on weather and river conditions before you start.

The Whanganui River passes through isolated and rugged country and is a physically demanding journey. It should only be undertaken by people in good physical condition and fitness. Once on the river, emergency communication is available only at John Coull Hut and Tieke Kainga and there is only road access to the river at Whakahoro and Pipiriki.

Don’t canoe the river when water levels are predicted to rise or it’s in flood. If you capsize you may not be able to get back in, or swim to the river’s edge. Always pull your canoe up high on the bank and tie it to something secure. It may not be raining on the river, but rain elsewhere in the large catchment can cause the river to rise several metres overnight.

To help everyone enjoy the Journey, there are some basic rules:

Your safety is your responsibility. To have a great time in the outdoors, know before you go the five simple rules of the Outdoor Safety Code to help you stay safe:

Seek local knowledge, plan your route and the amount of time you expect it to take.

It's important to plan, prepare and equip yourself well. Have the right gear and skills required for the trip and always check the latest information about facilities you plan to use, and local track and weather conditions.

Check for alerts at the top of Whanganui Journey page, or contact the Whanganui Office.

3. Be aware of the weather

New Zealand's weather can be highly unpredictable - expect weather changes and be prepared for them.

Watch for symptoms: people may shiver, be clumsy, confused, haveslurred speech, and deny they have a problem.

Treatment: immediately make or find shelter; get the person intowarm, dry clothing, put them into a sleeping bag, give them warm,sweet drinks, monitor them and seek immediate medical help.

This can be serious and is usually caused by physical activity in a hot environment and not drinking enough water.

Treatment: move to a cool shaded area to rest, remove excessclothing and give water to drink.

Challenge yourself within your physical limits and experience.

You must be self sufficient: be sure you have enough food, clothing, equipment and emergency food for the worst-case scenario.

Huts on the Whanganui Journey don't have toilet paper. Remember to take this with you.

These items can be hired as a package from local suppliers.

You can't buy food on the Whanganui Journey.

Bring food that is lightweight, fast cooking and high in energy value. For example:

The land surrounding the river is only about one million years old. Formed of soft sandstone and mudstone (papa) from the ocean-bed, it has been eroded by water to form sharp ridges, deep gorges, sheer papa cliffs and waterfalls.

Over this land has grown a broadleaf-podocarp forest of rata, rewarewa, rimu, tawa, kamahi and kowhai with beech dominant on the ridge tops. Tree ferns and plants that cling to the steep riverbanks are very distinctive.

Bird species such as kereru (native pigeon), tiwaiwaka (fantail), tui, toutouwai (robin), riroriro (grey warbler) and miromiro (tomtit) are often seen and heard. The call of the brown kiwi can often be heard at night. The river is rich in eels, lamprey, species of galaxiid (a group of native fish species including whitebait and kokopu), koura (freshwater crayfish) and black flounder.

Māori cultivated the sheltered terraces and built elaborate eel weirs along river channels where eels and lamprey were known to converge. Every bend of the river had kaitiaki (guardian) which controlled the mauri (life force) of that place. The mana (prestige) of a settlement depended upon the way in which food supplies and living areas were looked after for the benefit of the tribe and visitors.

Te Atihaunui, a Paparangi people, settled the valley from 1100 AD. In time the river became linked by a series of pa which were later called 'the plaited fibres of Hinengakau'.

The first major European influence arrived with missionaries in the 1840s. In 1891 a regular riverboat service began carrying passengers, mail and freight to the European settlers on the river between Taumarunui and Pipiriki and thriving tourist trade soon began between Mt Ruapehu and Wanganui.

The main riverboat trade ceased in the 1920s due to better roads, a main trunk railway and the development of other tourist attractions around the country, although riverboats were still operating in the late 1950s.

Air New Zealand is a national partner with DOC for conservation, and is proud to support DOC's Great Walks.