Find out about volcanic hazards in Tongariro National Park and what to do in the event of an eruption.

GeoNet has released a Volcanic Activity Bulletin for Mt Ruapehu.

The area 2 km from the centre of Te Wai ā-moe/Crater Lake is closed to the public and concessionaires due to the increased risk of eruption. This is in accordance with DOC’s volcanic risk management plan.

Eruptions can occur at any time without warning. To reduce the risk of being exposed to volcanic hazards while visiting Ruapehu:

Large areas of Tongariro National Park would be unaffected by eruptions at Ruapehu. All DOC tracks and huts in the Park remain open during Volcanic Alert Level 2 due to their distance from the active crater.

Mt Tongariro, including the Tongariro Alpine Crossing and Tongariro Northern Circuit, is not affected by increased volcanic unrest at Mt Ruapehu.

The information and advice on this page is intended for normal volcanic unrest conditions at the volcanoes.

If volcanic unrest is elevated, the information here is superseded by updates posted at the top of this page and on the DOC Tongariro Facebook page.

Tongariro National Park is an active volcanic area. Eruptions can occur with little or no warning. The closer you are to the Park’s active volcanic vents, the higher the risk.

A network of volcanic monitoring equipment and warning systems mitigate volcanic risk but cannot guarantee your personal safety. You are responsible for deciding the level of risk that is acceptable to you and planning your visit accordingly. 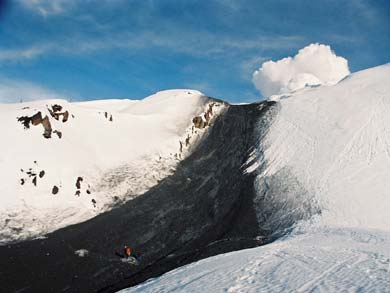 The Summit Hazard Zone on Ruapehu is a 3 km radius around Te Wai ā-moe/Crater Lake, which fills the vent of Ruapehu.

Flying rocks (ballistics), and fast-moving clouds of steam and hot ash, can occur during eruptions of Ruapehu. These are the most hazardous within the Summit Hazard Zone.

The main volcanic hazard to most visitors on Ruapehu is lahar. Lahars occur during eruptions when water in Te Wai ā-moe is ejected and flows at speed down valleys as a flash flood – mixing with ash, rocks and snow on its way down. There are multiple lahar paths through Whakapapa Ski Area, where a lahar warning system operates. Lahars can also occur when volcanic debris on the volcano’s slopes is remobilised during heavy rain.

Lahars can have impact beyond the Summit Hazard Zone – large events have travelled well beyond the slopes of the volcano.

The lahar of March 2007 occurred when a dam at the outlet of Te Wai ā-moe, created by eruption materials from the 1995 and 1996 eruptions, collapsed and released a deluge of water that flowed down the primary lahar path of Ruapehu – the Whangaehu Valley on the eastern side of the mountain.

The closer you are to Crater Lake and the longer you stay, the higher the risk you are exposed to. DOC recommends: 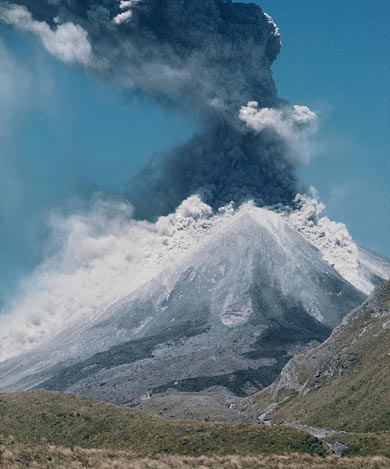 The Tongariro Hazard Zone is a 3 km radius from each of the three active vents of Mt Tongariro – Te Maari, Red Crater and Ngāuruhoe. These vents have all been active within the last 100 years. The most recent eruption occurred from Te Maari in 2012.

Flying rocks (ballistics) and fast-moving clouds of steam and hot ash are the main volcanic hazards on Tongariro.

The Tongariro Alpine Crossing and Tongariro Northern Circuit both pass through the hazard zone. Even when the tracks are open, volcanic risk is present. If you are uncomfortable with this risk, choose a different track.

If an eruption is detected, WLAWS produces a siren and voice message warning in at risk sections of Whakapapa Ski Area, signalling people to move out of lahar paths to higher ground.

If triggered by the geophone, fence, or both, VLAWS produces a siren and voice message warning, signalling people to move out of at risk areas to designated evacuation points. The system is primed by REDS and will not activate without an eruption being detected.

If you hear VLAWS sirens (4,075K, WAV) and voice messages in Whakapapa village: