There are three visitor-accessible volcanoes on public conservation land that have active or recently active volcanic vents. All three are in Tongariro National Park:

The only other volcano with a recently active vent on land managed by DOC is Raoul Island, which is not accessible to the public. This volcano last erupted in 2006.

How we manage volcanic risk

Using these guidelines, DOC manages proximity to potential eruption sources (hazard exposure) as volcanic unrest (risk) increases. Our management actions are mostly triggered by Volcanic Alert Level (VAL) changes. We will also make decisions on access based on other inputs from GNS Science and risk assessments.

Volcanoes are incredible and volatile forces of nature. It’s important to recognise that despite DOC having a robust volcanic risk management system in place, people's safety can never be guaranteed when close to an active volcanic vent.

A significant part of DOC's risk management work is notifying the public of the risk so people can make decisions on the level of risk they're willing to accept.

VALs do not forecast future activity. They provide an assessment of a volcano’s level of unrest at the time the alert level is applied and communicated.

Part of our risk management toolbox is the Volcanic Alert Network. These are warning systems which provide an additional layer of protection for life safety on the volcanoes.

The four systems of the Volcanic Alert Network are:

What to do in the event of an eruption

Changes after the 2012 Te Maari eruptions 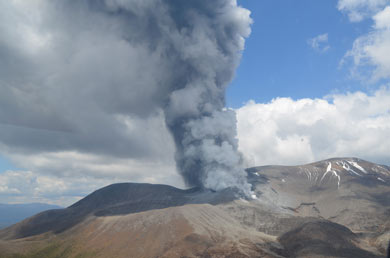 Te Maari erupting on 21 November 2012 – the lesson was the need to be decisive
Image: Craig Miller, GNS Science ©

The lesson from the Te Maari eruptions in August and November 2012 was the need to be decisive in managing increasing unrest at any of the three main vents – Ngāuruhoe, Red Crater and Te Maari.

Our methodology for managing volcanic risk on the Tongariro Alpine Crossing and Tongariro Northern Circuit is identifying closure points based on the GeoNet Volcanic Alert Levels (VAL).

The length of this initial VAL 1 closure period is dictated by the data available, risk assessments and input from GNS and/or other subject matter experts. If DOC is confident that the probability of eruption is low, and the level of risk is tolerable, then the track is reopened.

At VAL 2 and above, the track is closed until the activity has deescalated to VAL 1 or VAL 0. Again, the assessment to reopen would involve risk assessments and expert input.

Changes since the 2019 Whakaari eruption

The management of volcanic risk has not materially changed since the Whakaari eruption.

DOC has well established systems to manage risk that have improved over decades, learning from the multitude of eruptions that have occurred in Tongariro National Park.

Our documentation is always evolving, and our practices are subject to change as improvements are identified, and progress is made in the fields of earth science and risk management.

Our current approach incorporates the consideration of eruption probability but recognises that the most robust mechanism we have to trigger management action is Volcanic Alert Levels.