Te Kakahu/Chalky Island skink is known to only live in one small area in Chalky Inlet, Fiordland.

Population: Unknown but restricted to a small area on a predator free island. The population is slowly expanding since the eradication of predators.
National status: Endemic
Threat status: Threatened–Nationally Endangered 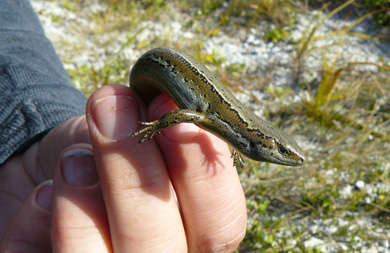 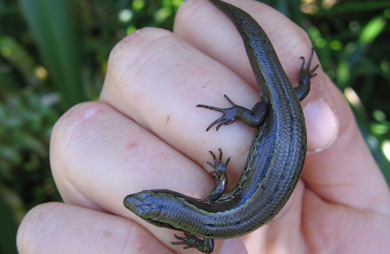 The Te Kakahu skink is a point endemic (only found naturally at one specific location in the world), known only from one small area, approximately 50 m² onTe Kakahu O Tamatea/Chalky Island in Chalky Inlet, Fiordland.

It was first discovered in 2002 by members of the Kakapo Recovery Team and was formally described in 2011.

The Te Kakahu skink is one of six distinct species in the Oligosoma inconspicuum or cryptic skink species. It is classified as 'Nationally Endangered' in the DOC Threat Classification System – the second highest ranking possible.

It has the highest priority for translocation due to their perceived vulnerability, known only from one location. It is possible this species exists in similar habitat on islands or the mainland elsewhere therefore systematic surveying of these areas is a priority.

A 2018 survey found the skink was inhabiting a cliff area covering several hectares.

The skinks were also found in a completely new location, on a tiny islet of the south coast of Fiordland.

In February 2018 a translocation took place from Chalky Island to Anchor Island with the aim of securing a new secure population.

The vulnerable Te Kakahu/Chalky Island skink is doing well thanks to a herpetofauna project supported by Chalky Digits and the Fiordland Conservation Trust.