2016
This report details the methods and results of a population assessment of the critically endangered Te Kakahu skink on Chalky Island.

This report details the methods and results of a population assessment of the critically endangered Te Kakahu skink (Oligosoma tekakahu sp. nov.) performed on Chalky Island from 29 February to 3 March 2016, supported by New Zealand clothing company Chalky Digits, via the Fiordland Conservation Trust. The aim of this work was to provide a secondary count to confirm whether the population will sustain harvest for a translocation. A total of 96 individuals were captured in Gee-minnow traps, over the monitoring period, indicating a relatively abundant population. The initial count in 2013 was 160 individuals. The weather during the 2016 monitoring period was not as fine as it was in 2013, therefore the capture rate was significantly reduced. Skinks were seen in low scrub north and south of the study site, increasing the knowledge of their distribution.

The Te Kakahu skink is a point endemic, known only from one small area, approximately 50m² on Te Kakahu - o - Tamatea or Chalky Island in Chalky Inlet, Fiordland.  It was first discovered in 2002 by members of the Kakapo Recovery Team and was formally described in 2011 (Chapple et. al.  2011). The Te Kakahu skink is one of six distinct species in the O. inconspicuum or cryptic skink species complex, and is classified as nationally critical in the Department of Conservation Threat Classification System (Hitchmough et. al.  2012), the highest ranking possible under the New Zealand Threat Classification System (NZTCS; Townsend et al. 2008).

It has the highest priority for translocation due to their perceived vulnerability, known only from one location. It is possible this species exists in similar habitat on islands or the mainland elsewhere therefore systematic surveying of these areas is a priority. In 2013 the population of Te Kakahu skinks were monitored to gain a population estimate. Over three days 160 individual skinks were captured, indicating the population is healthy and could sustain harvest for a translocation to another pest free site. It was recommended to repeat this survey every three years.

Te Kakahu - o -Tamatea or Chalky Island (514 ha) is located at the entrance to Chalky Inlet in southern Fiordland. It is a predator-free island and is home to a suite of threatened species. The location of the skinks is in an open area above chalk cliffs at 134-142m a.s.l in the north-west of the island. The skinks are associated with vegetation such as grasses (Carex spp. and Rytidosperma spp.) and prostrate shrubs Oleria avicennifolia, and O. oporina (Chapple et al. 2011).

A mark-recapture study design was used. A total of 43 Gee-minnow traps were set up 4 m apart in four lines across the known habitat, see fig 2. Traps were positioned in short vegetation and tied down to prevent them blowing away in the wind. Vegetation was put inside the traps to provide shelter and the traps baited with small pieces of canned pear. Bait was replenished daily. Traps were checked during the late morning and afternoon of each day after lizards had become active and began feeding. Each animal captured was aged, sexed and marked with xylene free silver pen. Skinks were not weighed as attempts to do so were unsuccessful due to even slight wind at the exposed site.

Weather conditions and air temperatures at 1 m and at ground level were taken at intervals during the monitoring using a Kestrel hand meter and an indoor/outdoor display temperature monitor. Two Gee-minnow traps were set up for surveillance in low vegetation approximately 50 m away from the main monitoring site. Short vegetation approximately 50 m to the north of the main site was searched for lizards. 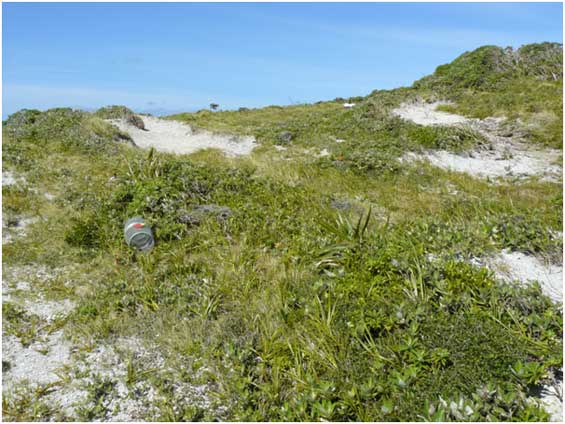 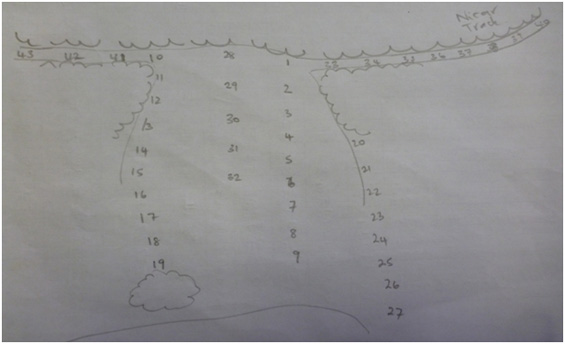 A total of 96 individual skinks were captured over two full days, one afternoon and one morning. The weather was cloudy and cool for the first afternoon and day of monitoring, however the third day was sunny and most skinks were captured then. The last morning was windy and overcast. A high proportion of the skinks captured were gravid. There were several juveniles and neonates. One gravid female skink was captured in one of the surveillance traps to the south of the study site, and several skinks were seen in short vegetation to the north of the study site. Skinks were seen along the Nicar track, 30m north as well as the same distance south from the study site or blowout.

Monitoring indicates there is a relatively abundant population of Te Kakahu skinks which should sustain harvest of at least 40 individuals for a translocation to a suitable pest free island. The population could sustain harvest on a two yearly basis, if the translocation requires it. The weather is a significant determining factor in capture rates; sunny days obviously have higher capture rates than cooler overcast days. Even though the forecast was good for the week we monitored the skinks, there was only one day of sunny weather, this is something to be considered when catching for a translocation or even for future monitoring. Northerly wind direction with no rain/cloud with no southerly winds would be optimal.

The Gee-minnow traps worked well as a capture method, although skinks were seen basking on top of the traps, or near the traps without going inside. Several trapping options should be utilised when capturing skinks for a translocation. Skinks could be hand caught. There are at least four onduline artificial cover objects at the site, some of which are used by skinks.More of these could be placed prior to next summer. Pit-fall traps could be used along the track where the ground is softer to dig.

Systematic surveys for all herpetofauna on predator-free Fiordland Islands such as Chalky, Anchor, Coal, Resolution and Secretary, using experienced herpetologists should be conducted in the future to:

Thanks to Chalky Digits for funding the skink monitoring and for Liz Collins and Teresa Scott for joining the monitoring team. Thanks to the Fiordland Conservation Trust for their support.