Lamprey are primitive, jawless fish. They look like eels but are more closely related to sharks and rays. 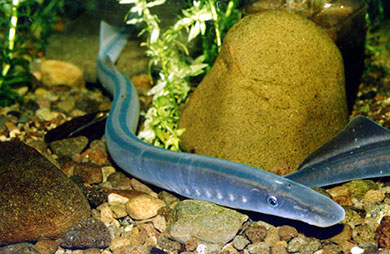 New Zealand status: Native
Conservation status: Threatened - Nationally Vulnerable
Names: Lamprey have several Māori names. They are known mostly as kanakana in the South Island and piharau in the North Island.
Found in: Distributed throughout New Zealand including Chatham Islands and Stewart Island/Rakiura. This species is also widespread in the Southern Hemisphere including Australia.
Threats: Migration barriers, loss of habitat, poor water quality and some activities in streams like clearing drains.

Lamprey (Geotria australis) are ancient fish, which have existed for more than 360 million years. There are 38 known species worldwide but only one is found in New Zealand.

From a distance, adult lamprey could be mistaken for eels but they are easily distinguished with a closer look. Eels have jaws and teeth but the lamprey’s jawless mouth is a circular fleshy sucker, filled with hundreds of small teeth and a rasping tongue. Unlike eels, lamprey have no fins near their head. Just behind their eyes, lamprey have seven pairs of small holes that are the openings of their external gills.

Lamprey are secretive and can be very hard to spot. They often hide during the day under logs or large rocks, or burrow into streambeds, venturing out at night to feed. Lamprey use their powerful sucking mouths to climb steep waterfalls while migrating upstream.

Lamprey is a mahinga kai species for Māori and an important traditional fishery. In the past, these fish were abundant in many New Zealand rivers and were harvested using various methods.

One method was the use of lamprey weirs, known as utu piharau or pā kanakana. The weirs were common on the Whanganui River, where they consisted of large wooden barriers built out from the shore with gaps between them.

Because lamprey are secretive, they are hard to find and study so relatively little is known about the species and the habitats they prefer.

In 2013 NIWA scientists found the first spawning site of a Southern Hemisphere lamprey species in a small river on Banks Peninsula in Canterbury. Three nest sites were found with eggs clumped to the underside of rocks.

Read a media release about the find.

The lamprey lifecycle takes about 9 years to complete

During winter and spring, adult lamprey move from the sea into a river and travel upstream to find habitat to lay their eggs. Lamprey mostly migrate upstream at night and when river flows are higher than normal. During the day they shelter between boulders and in debris beside stream and rivers.

This journey upstream takes 12–16 months. Adult fish do not feed while they are in freshwater. Instead they use fat reserves for energy and to complete the development of their reproductive organs. During this time they shrink to two thirds of their adult size. Also, lamprey change colour to a dull brownish grey and male fish develop a large baggy pouch behind their mouths.

Lamprey can travel long distances and some have been found more than 200 km inland. Adult lamprey are very good climbers but cannot get past every instream obstacle. For example some waterfalls and dams are too high or steep or the water flow is too fast to allow the fish to pass.

Eggs are laid under boulders in streams

Lamprey spawn in spring and early summer. They choose a concealed crevice or hole with a hard surface and good water flow, laying their eggs in a cluster in this underwater ‘nest’. Both male and female fish stay in the nest for up to 7 weeks and guard the eggs from predators. The male fish seem to care for the developing larvae and help them hatch.

Larvae live in rivers for 3–4 years

Lamprey larvae (ammocoetes, pronounced ‘ammo-seats’) hatch in about 6 weeks and stay in the nest for another 2–3 weeks. They have no eyes and a hood over their mouths, and are a greyish brown colour.

Once the ammocoetes leave the nest, they burrow into very fine mud or sand in slow-flowing muddy backwaters, waterway margins and shallow shaded parts of a river. At night they partially emerge to filter-feed on algae and other microorganisms in the water.

Juvenile fish move out to sea

By January, larvae have become juvenile fish called macrophthalmia. In this life stage their fins enlarge and teeth develop and they have large silver eyes. Macrophthalmia are a brilliant silver-blue colour with thin blue stripes along their backs.

Macrophthalmia migrate further downstream at night when the river is flowing rapidly, which accelerates their journey. By the time they reach the sea in July–August, the fish are about 80–120 mm long.

Adult fish live in the sea

Adult lamprey spend 3–4 four years in the sea, growing to 450–750 mm. During this life stage, adults are silvery-blue with two blue-green bands on either side of their bodies.

Lamprey attach themselves to large animals like fish and whales using their sucker mouth. They feed as parasites, rasping into the host’s flesh with their sharp teeth and sucking out blood.

While at sea, lamprey travel long distances in large groups, and often swim near the surface. Lamprey have been found as far south as Antarctic waters.

Threats to lamprey and their habitat

The number of lamprey in New Zealand’s rivers is decreasing. Threats to their populations include:

Dead and dying adult lamprey have been found in Southland rivers since 2011. These lamprey have markings like bruises over all or part of their bodies or fins. While the cause of lamprey reddening syndrome has not been confirmed, it is thought that several factors are making the fish more susceptible to a bacterial infection.

Iwi, hapū, whānau, DOC and the Ministry for Primary Industries (MPI) are researching the syndrome. Call MPI’s 24-hour hotline 0800 80 99 66 immediately if you find dead lamprey with red markings, or fish that have died from unexplained causes.

You can help turn around the decline in lamprey populations by protecting their habitat:

Our waterways need to be carefully managed so native fish can access the habitats they need. These fish move within rivers and streams and to and from the sea to complete their lifecycles.

Many of New Zealand’s native freshwater fish species need to move up and downstream and to the sea and back during their lifecycles. It’s important that structures built into streams allow them to move freely.

These videos show how different species of native fish swim, how some can climb obstacles and why some structures in streams are barriers to their migration to the sea and back.

Find out about the freshwater pests that are found in and threaten our freshwater ecosystems.