Find out about red deer - the most widespread deer species in New Zealand. 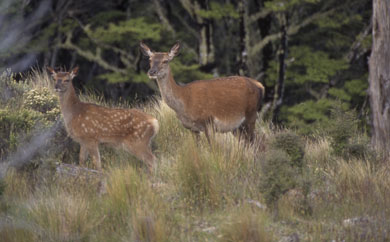 The head of red deer (Cervus elaphus) is longer and more bony in appearance than sika deer. Their ears are pointed and can be longer than half the length of their head. Red deer tails are short (12-15 cm) and match the colour of their upper rump.

Colour: The summer coat of red deer is typically a reddish brown. White spots are extremely rare on adults and limited to the area around the spine. Although red deer sometimes have a dorsal stripe, it is usually restricted to the neck and hip regions, and is rarely continuous.

The winter coat of red deer is usually of a brown or grey-brown with the throat and underside being light grey grading to creamy-white between the hind legs.

Although red deer have a cream rump patch, no margin is present and it cannot be flared as in sika.

Antlers: Antlers are grown and cast annually by males from their second year.

The antler beams of red stags are larger and wider than those of sika stags. In cross-section, the bone component of the antler is thinner in red deer than for sika deer, and there is a comparatively larger porous core. In red deer, the brow tines usually branch closer to the coronet and are at right angles to the main antler beam. Red deer also have bez tines.

Velvet antler growth starts between early September and December and is complete when the dried velvet is frayed from the hard antler between mid-January and mid-March.

Male groupings may be quite loose but female groupings are much more cohesive, made up of females their young and previous season's offspring.

Feeding occurs early morning and late evening although in undisturbed areas or in periods of light rain feeding may occur over extended daylight hours.

Reproduction: Before the rut, male groupings break up as the older males seek to establish their own rutting area and attempt to attract females into a harem. During the roar, males will roar periodically, especially in the early morning and evening.

Red deer make use of wallows, both during the roar and at other times of the year. The covering of mud accentuates the smell of a rutting male and can give the deer a larger, darker appearance.

The rut is from late March through April with most conceptions occurring early to mid-April.

Red deer are the most widespread deer species in New Zealand with wild populations established throughout most of the forested and tussock country from the Kaimai Range in the north to Stewart Island in the south.

Areas that have few or no red deer are Northland, much of Taranaki, Coromandel and Banks Peninsula.

For specific location information, go to Hunting, select a region and then a hunting area.

Some of the country occupied by red deer is private property and you will need landowner permission to hunt these areas.

In New Zealand, there is no seasonal restriction to hunting red deer, so generally they can be hunted throughout the year. There are however, instances where restrictions apply for specific reasons and periods when hunting is favoured.