In 1946 Pureora Forest was one of the last native forests to be opened up for logging. Today, there are several historic attractions within the park.

The park preserves the last remnants of extensive native podocarp forests that once covered most of the central North Island. When deep under the canopy of these ancient trees, it’s easy to imagine primeval New Zealand as it existed thousands of years ago.

In 1840 around two thirds of New Zealand was still covered in virgin forest. Over the next 140 years this provided the basis for a strong indigenous timber industry. In 1946 Pureora Forest was one of the last native forests to be opened up for logging. 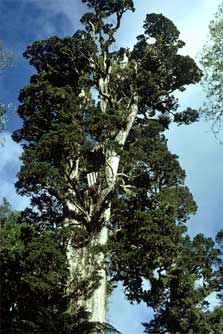 Ancient totara tree with a protester's platform in the branches, Pureora Forest

DOC manages several historic attractions within the park including:

The treetop protest site – one of New Zealand’s most significant conservation battles took place at Pureora in 1978. Protestors occupied platforms built in the treetops (near the site of the present day Forest Tower) and their actions led to a government-imposed logging moratorium and, eventually, the end of native forest logging in the park.

The former mill village – a range of workers houses dating from 1947.

Ongarue Tramway and Spiral - much of the Ongarue tram system survives unmodified, making it a nationally significant site which represents an important part of the timber industry and pioneering New Zealand.

Bog Inn Hut - hunters and trampers can stay in this small hut was built in 1960 to house scientists studying the nearby mountain mire known as ‘The Bog’.

Choose one of the various walking and mountain biking tracks within the park and discover historic relics while enjoying the beautiful scenery.