Unlike most other bush tram routes, much of the Ongarue tram system survives unmodified, making it a nationally significant site which represents an important part of the timber industry and pioneering New Zealand.

The Ellis & Burnand operation at Ongarue was a major Central North Island timber industry operation in both scale and longevity.They were one of the largest native timber companies in the country, and almost certainly the leading producer of rimu timber.

The extensive old forests of New Zealand provided the timber trade with enough resources to establish it as a major pioneering industry.

Until the late 1940s bush tramways were the principal method of transporting felled timber. Around 1000 bush tramways once operated throughout the country. Most of the tram routes have been destroyed as they were replaced with roads or as land was converted to farms and plantation forests.

Unlike most other bush tram routes, much of the Ongarue tram system survives unmodified, making it a nationally significant site which represents an important part of the timber industry and pioneering New Zealand.

The spiral is one of the most spectacular sections. An impressive sight, it comprised a lower-level bridge, a very deep cutting, a curved tunnel, a complete circle of track and an over-bridge. 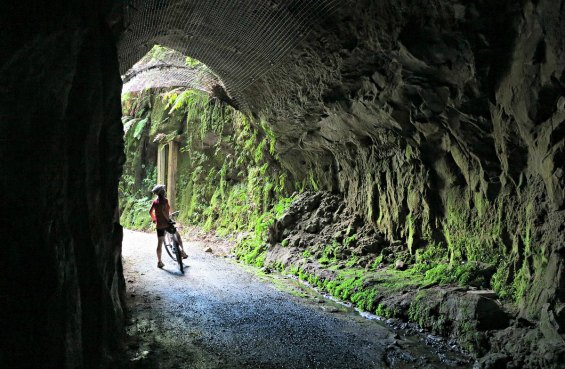 The site is located south of Hamilton between Te Kuiti and Taumarunui in the south-western part of Pureora Forest Park.

The full length of the tramway is now part of  The Timber Trail: Pureora - Ongarue, which visitors can walk or bike.

A national history overview on bush tramways is published: Mahoney, P, 1998, The Era of the Bush Tramway in New Zealand, IPL, Wellington. This book identifies the high national value of the Ongarue Tramway as a heritage site.

Using historic bush tramways, old bulldozer and haul roads, and newly constructed track, this Grade 2/3 trail features 35 bridges, including some of the highest and longest in New Zealand.