Several operators provide daily tours to the islands. You can camp on Mou Waho and Te Peka Karara Island.

Help look after these special islands: respect the dog and total fire ban, remove all your rubbish, check your gear and report any pest sightings – see visiting pest free islands.

You can get involved in projects restoring the islands – contact the visitor centre.

Wave action has damaged the stacked stone wall below the Mou Waho jetty. Temporary repairs have fixed the damage and the wall will continue to be monitored until a permanent repair is made.

The jetty remains open for use.

Mou Waho (120 ha) translates as 'Outer Island' and has a long and rich Māori and European history. Over time Mou Waho has had several different names including Te Mou-a-hou, Pigeon, Harwich and Manuka. 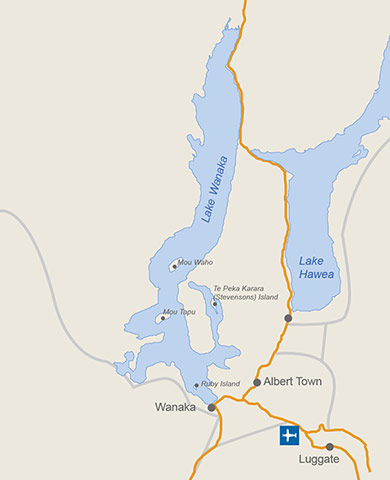 The island was used for both boat building and sheep farming. In 1863, Alfred Pinn established a cottage near today's main landing and built wooden schooners for the lake trade using Mou Waho timber. Remnants of the stone wharf and cottage can still be seen.

Mice were successfully eradicated in 1995. It's a pest-free haven for several plant, bird and insect species that have disappeared or severley reduced from the adjacent mainland, including the mountain stone wētā and the Southern Alps gecko. The inquisitive buff weka was transferred here in 2004 from Te Peka Karara and there are now an estimated 200 weka on Mou Waho.

It was once forested with impressive stands of mātai and tōtara. Several fires over the years have destroyed native vegetation on the island and hindered its recovery. However, DOC and the local community have worked together to remove exotic animals and plants and re-establish native vegetation and bird species.

Mou Waho is geologically interesting with glacially scoured out Arethusa Pool (earlier named Moutimu by Māori, then Paradise Lake) in the middle of the island 150 m above lake level.

Wasps can be common from December to April, carry antihistamine if you are allergic to their stings.

Activities: A return walk (less than 3 km) leads from the wharf up the hill to a viewpoint (450 m) overlooking the fascinating Arethusa Pool and a wider view of Lake Wānaka and surrounding mountains.

Facilities: You can camp on the island and there is a toilet and barbeque available.

Management: Mou Waho is a scenic reserve managed by DOC.

Activities: Te Peka Karara has a lovely beach. A short bush walk of less than 1 km return takes you to the top of the island (300 m) where there are great views.

Facilities: You can camp on the island and there is a toilet and barbeque available.

Mou Tapu (120 ha) is a pest free island. Despite once being grazed this steep inaccessible island has retained healthy bush remnants that has helped its natural restoration.

Mice were never established on Mou Tapu and the island is critical to the survival of several species of plants and animals that were wiped out or severely reduced in mainland Otago by introduced predators. This includes the mountain stone wētā and the Southern Alps gecko.

Activities/facilities: There are no tracks or facilities on Mou Tapu.

Management: Mou Tapu is a scenic reserve managed by DOC.

Ruby Island (3 ha) is the closest and most accessible island to Wānaka township. It has a grand history of cabaret evenings.

The Ruby Island Management Committee is a group of volunteers who have been looking after the island since 1995. Community plantings are restoring this island that has been affected by past fires.

Activities: Ruby Island lies within 1 km of the mainland and is a popular picnic and kayak destination. On a fine day the short walk from the wharf offers great views over the lake.

Dogs: Dogs are allowed on the island.

Facilities: No camping on the island. There is a toilet and barbeque available.