Located in Ruataniwha Conservation Park in the Canterbury region

This historic hut is set on a river fan of the Hopkins, with surrounding beech forest, in Ruataniwha Conservation Park. Built in 1916 for commercial guiding to the Barren Saddle by, Red Hut was used mainly as a mustering hut by the Huxley Gorge Station. 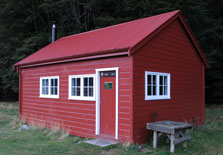 Built in 1916 for commercial guiding to the Barren Saddle by the Government Tourist Department (R W Wigley), Red Hut was used mainly as a mustering hut by the Huxley Gorge Station. In 1956 the station presented Red Hut to the New Zealand Forest Service.

Red Hut was fully restored in 2003, thanks to funding allocated to DOC for upgrading of recreational facilities. Fully clad in rust-red ship-clad weatherboards, Red Hut now looks much the same as it would have when it was first built. New windows were specially constructed in a style modelled from the one original window that remained, including authentic window catches made by a forging outfit. Typical of tourist huts of that era, Red Hut still has two separate rooms - one for the men and one for the ladies. Modern improvements added to the hut include a new log burner, and pink batts in the roof to keep the hut a cosy place to stay.

This two-roomed 12-bunk hut is approximately 7.7x5 metres, set on concrete poured into tins piles. Clad in rusticated weatherboard except for the west wall, which was re-clad in tin weatherboard in 1977. The roof is corrugated iron. The ceiling is match-lined and the original melthoid interior walls were replaced with hardboard and battens in 1985. The floor is 140x20mm tongue and groove.

Modifications carried out by the New Zealand Forest Service include the installation of a fireplace in the bunkroom, c.1960; the original fireplace was closed off and replaced with a sink and bench unit along that wall and a new fireplace made on the west wall, c. 1964/65; and all but the window on the north wall have been replaced.

The hut is set on a river fan of the Hopkins, with surrounding beech forest, in Ruataniwha Conservation Park.

High, even with the modifications.

Early example of a tourism hut.

The hut will be maintained to protect its historic fabric and minimise deterioration, and for recreation use.

Red Hut is 4 hours (15 km) up the Hopkins Valley from Ram Hill carpark, at the end of Lake Ohau Road.

Before you go, buy 1 Standard Hut Ticket (blue for adults, yellow for youth) for each night's stay. Put this in the honesty box at the hut. Or buy a Backcountry Hut Pass that gives unlimited use at most Standard and Serviced huts for a 6 or 12-month period.

More about hut tickets and passes