Located in Ahuriri Conservation Park in the Canterbury region

This is a basic hut in the Mackenzie Country and Waitaki area. 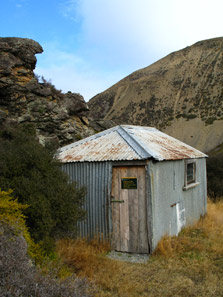 Hideaway Hut has preserved our farming history in an interesting fashion. 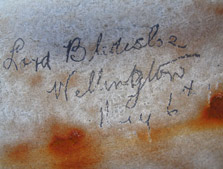 Names of sheep musterers and the date they visited Hideaway Hut have been pencilled on the external corrugated iron walls and roof.

Lead pencils contain graphite and this reacts with the zinc coating on the corrugated iron, forming a metallic bond that cannot be erased. The names are now permanently etched. They make for fascinating reading, with 1895 the oldest date found on the hut.

The roof of the hut holds an interesting inscription with the words ‘Lord Bledisloe, Wellington, May 6th 1931’. Bledisloe was one of the Governor Generals of New Zealand.

A detailed list of all the pencil markings on the hut exterior has been mounted on the back wall inside the hut.

Hideaway's exact age is a mystery

There is little information on when Hideaway Hut was built. It is thought to date from the 1890s and was built for the musterers of Benmore Station - a large sheep station in North Otago. It later became part of Quailburn Station, which was subdivided from Benmore Station in 1916.

In addition to the corrugated iron stories, visitors to this hut will also find the inside very welcoming. The wall and roof framing are made of beech poles, mostly with the bark still on. DOC has laid a floor of mixed cement and clay, secured a new door, fixed the bunks and installed character furniture.