Quailburn Station was once part of the vast property known as Benmore Run, which was one of the largest properties in Otago during the 1870s. Visitors to the historic site will find a woolshed, sheep-dip, homestead and some hut ruins dating from 1866.

Quailburn Woolshed is closed due to damage from strong winds in October 2020 and is taped off for visitor safety.

Quailburn Station was once part of the vast property known as Benmore Run, which was one of the largest properties in Otago during the 1870s. 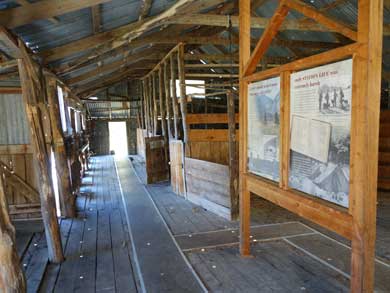 Sheep mustering on the Quailburn hills was a harsh life. Interpretation panels installed in the old woolshed detail some of the hardships endured. The woolshed is beech pole construction and was built in the 1920s. The sheep-dip lies near the shed, with the yards and race still standing.

To find the homestead you need to walk uphill for five minutes where it sits amongst birch trees.

Remains of possibly the original ‘out station’ hut for Benmore Station is located close to the start of the Quailburn Bush Track. It is thought to have been occupied by a married couple in 1878-79. The foundation blocks are scattered amongst long grass.

Getting there: Quailburn historic site is part of Ahuriri Conservation Park and is located at the end of Quailburn Road, near Omarama. Access to this site is extremely good with car parking right next to the woolshed itself.

The East Ahuriri was once part of Benmore Run, which by 1892 had nine mustering huts. From research it is not clear if this hut was one of the nine or a 14’ x 10’ hut built between 1892 and 1898 (Pinney 1981). Pinney in his book (p38) also states that a "married shepherd, at least in 1878 and 1879 lived at Quailburn hut", and that he was allowed to cut firewood some six km distance. It is not clear from the book where this hut was, but the distance from Quailburn bush to the East Ahuriri hut is similar. In 1916 when Benmore leases expired East Ahuriri was reduced in size and became part of Quailburn Station.

The late Ed Hardy, a run holder of Quailburn, told Dave Massam a few years ago that the hut was over 100 years old which would indicate that it could possibly have been built between the late 1870’s and early 1890’s. Further research will be undertaken to try to establish a period when it was built. Only two names could be found in the hut. On the back of the door is carved M Hardy and E Hardy 6/1/58. To the east of the hut are the remains of a small (possibly horse) paddock.

This hut has an historic theme of high country farming.

The hut has regional significance for its role in high country pastoral farming.

The hut is located on the true left of the Ahuiri River East Branch below Quailburn Saddle. One roomed hut 4.4m x 2.9m of beech pole construction clad in Comet brand corrugated iron with Lino lead head nails. Between the iron and the beech poles tar impregnated paper lining has been placed.

The hut has an earth floor and six-beech pole netting bunks. The chimney in the south wall is iron but is unsafe. The door is cedar. The only modern element is a three-pane louvre window in the west end gable. It is possible that this replaced an earlier window, as it is the only one in the building.

The hut will be maintained to protect its historic fabric and minimise deterioration.

Hideaway Hut, also tucked away in Ahuriri Conservation Park, has preserved our farming history in an interesting fashion. Read more about Hideaway Hut.