The disease causes bright yellow-orange powdery pustules on young leaves, shoots, fruits and flowers of plants in the myrtle family.

Myrtle rust cannot be eradicated from Aotearoa. But there are things you can do to help us manage the impact and protect our taonga myrtle ngahere.

Latest news and information about myrtle rust on the Myrtle Rust website.

What to do if you see myrtle rust 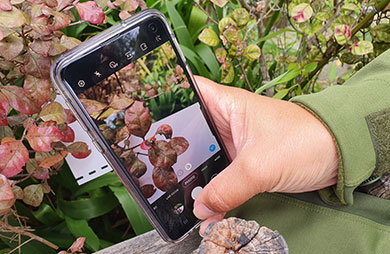 Your reports of suspected cases are vital in helping determine where myrtle rust is in New Zealand, how far it has spread and whether eradication, containment or even slowing the spread is feasible.

The earlier we find out about any New Zealand infection, the greater our chance of doing something about it.

If you're planning to plant myrtle species check the Myrtle Rust website for advice.

Symptoms to look out for are:

The lesions get bigger and produce masses of bright yellow spores

Why myrtle rust is a threat 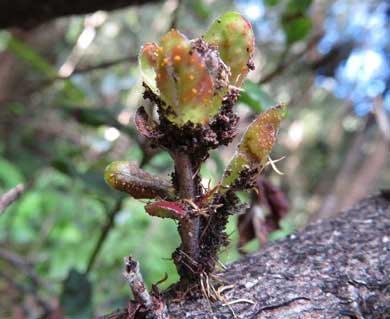 The developing lesions may cause a deformation of the leaves and shoots, and twig dieback if the infection is severe. It can also affect flowers and fruit. Infection may result in plant death.

Myrtle rust is notoriously difficult to control. However, it was caught early on Lord Howe Island and may have been controlled there. Unfortunately by the time that the rust pustules are visible on plants, spores are already spreading.

It will be extremely difficult to eradicate in New Zealand.

How to identify myrtle rust

How it can spread

Myrtle rust spores are microscopic and can easily spread across large distances by wind. Myrtle rust is likely to be carried by wind to New Zealand from Australia, New Caledonia or Raoul Island.

We do not know where the rust has come from, and if it is the same type as that from Australia or New Caledonia. We need to still treat the rust in those countries as potentially different from that on Raoul Island or on mainland New Zealand.

Spores can also be transported on contaminated clothing, insects, rain splashes and equipment.

In January 2019, the Ministry for Primary Industries (MPI) found myrtle rust produced a teliospore stage in New Zealand. This spore stage is different from the asexual urediniopsore stage and indicates that the fungus is capable of reproducing sexually. Sexual reproduction introduces genetic variability, increasing the risk to New Zealand, as it allows fungi to adapt to new environments and possibly affect new hosts.

The asexual stage forms yellow to orange pustules whereas the presence of light to dark brown pustules might indicate the formation of the sexual stage. New Zealand already has stringent biosecurity measures to protect against myrtle rust introduction, including a complete ban on imports of cut flowers and foliage from myrtle species in New South Wales, Queensland and Victoria.

There are strict biosecurity procedures for DOC staff travelling between Raoul Island and the New Zealand mainland to prevent any people-assisted spread. Entry to the island is by permit only.

The Raoul outbreak will be used to learn more about myrtle rust – how it affects different species, trialling treatments and banking seed from local iconic species for future planting.

Research on beehives and myrtle rust

More about honeybees on conservation land

Where DOC is looking for myrtle rust

Myrtle rust has been found across most of the North Island and upper areas of the South Island.

Purple to blue blocks are areas with myrtle plants confirmed by Biosecurity NZ prior to 30 June 2019. Blue dots are myrtle plant locations compiled from crowdsourced data.

Note that not all myrtles in New Zealand are captured on this map and only myrtles that have been identified through Biosecurity NZ and crowdsourced data are listed. You can log your own observations on the inaturalist website.

The myrtle rust programme is a partnership between Biosecurity New Zealand (a branch of the Ministry for Primary Industries) and DOC.