DOC is concerned about the risks to beekeeping sustainability in New Zealand. We are taking the lead by creating a sustainable model for beekeeping – one based on conservation.

DOC has integrated science into the beehive allocation work. See Honeybees on public conservation lands report (PDF, 316K) which was commissioned to understand the impact of honeybees on native species. 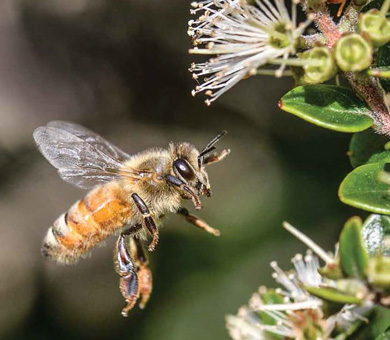 Research shows honeybees, an introduced species, may compete with some native species for food as they forage nectar and pollen from many of the same flowers as native birds, bats, lizards and insects.

They also increase pollination of some weeds and alter pollination processes in some native plants.

There is a risk of spreading pests or diseases from beekeeping on public conservation land.

DOC has assessed the potential of mānuka plantations for ecological restoration, carbons equestration and revenue on conservation land. There are concerns about the risk of hybridised mānuka on the natural diversity of mānuka species.

Until further research is carried out, planting will only be considered where local seed can be sourced.

Myrtle rust is a serious fungal disease that affects plants in the myrtle family. It can damage and kill plants such as pōhutukawa, mānuka and rātā. These plants are critical for healthy ecosystems to support our native species such as birds, bats, lizards and insects.

DOC is using a precautionary approach to the myrtle rust risk until more information about the role of honeybees in myrtle rust is established.  DOC has implemented restrictions on the movement of hives in specific parts of the country, in an effort to reduce the introduction of myrtle rust. The following restrictions apply:

DOC will undertake an annual review to establish if the restrictions have reduced the spread or introduction of myrtle rust in specific areas of New Zealand. DOC will also continue to work with key stakeholders to better understand the myrtle rust risk from honeybees, and how the risk can be managed. This will impact how DOC continues to manage beehives.

DOC engages with iwi as our Treaty partners on conservation issues – including beekeeping.

We work with Apiculture New Zealand to make sure our processes are well connected with the industry, and beekeepers are kept informed.

We are part of a multi-agency group, facilitated by the Ministry of Primary Industries, looking at mānuka and beekeeping issues to ensure a joined-up government approach.

Here's what you need to know about complying with your concession, making changes to it and managing it over time.