Timeline of protection for Māui and Hector’s dolphins

A list of events that have taken place to understand and protect Māui and Hector’s dolphins since Māui were declared a subspecies in 2002.

A study commissioned by DOC and Fisheries New Zealand reported that there were likely to be 54 Maui dolphins over 1 year old within the survey area, with 95% confidence that the number of dolphins was between 48 and 64.

Hector’s and Māui dolphin Research Strategy 2021 created to support the vision and goals of the Hector's and Māui Dolphin Threat Management Plan (TMP).

Changes to five marine mammal sanctuaries and the Kaikoura Whale Sanctuary came into effect on 5 November.

Information about these measures, including maps.

The Minister of Conservation gazetted the final changes to 5 marine mammal sanctuaries and the Kaikoura Whale Sanctuary.

After considering feedback from the public consultation, the Minister of Fisheries announced new fishing measures to take effect in October 2020. These were to:

Information about these measures, including maps.

The Minister of Conservation announced her intention to vary five marine mammal sanctuaries and the Kaikoura Whale Sanctuary, to increase protection for the dolphins.

Possible measures to reduce risks to the dolphins were released for public comment:

A review of the Hector's and Māui dolphin threat management plan began. An extensive research, risk assessment and evaluation process was developed and completed in 2019.

A study commissioned by DOC and the Ministry for Primary Industries reported that there were likely to be 63 adult Māui dolphins remaining, with 95% confidence that the number of dolphins over 1 year old was between 57 and 75. The study used the same methodology as the 2010–2011 abundance survey.

The Minister of Conservation, along with the Minister for Primary Industries, announced that the proposed variation would be implemented in full, alongside a package of protection measures to be implemented as part of the Māui threat management plan review. The package used legislation from the:

This included maintaining the interim protection measures from 2012.

The Minister of Conservation announced his intention to consult on varying the Marine Mammal Sanctuary to include extra protection measures for Māui dolphin in the Taranaki region and seek submissions on his proposal.

Submissions on the Review of the Māui's Dolphin Threat Management Plan closed.

Risk assessment of the threats to Māui dolphin was published.

A risk assessment of threats to Māui dolphin (PDF, 6,850K)

A consultation paper for the review of the Māui's dolphin threat management plan was published by DOC and MPI. This review process aimed to reassess management measures based on updated information on:

The Minister of Conservation and the Minister of Energy and Resources launched the code of conduct for minimising acoustic disturbance to marine mammals from seismic surveys operations.

The new code was more stringent than the previous guidelines and the marine mammal sanctuary regulations. It afforded increased protection to Māui dolphin by identifying their entire historic range out to water of 100 m depth as an area of ecological significance, which triggered additional mitigation measures.

An updated literature review for Māui dolphin was published.

New interim fisheries restrictions in southern Taranaki came into effect on 28 July. They were intended to increase protection for Māui dolphin in this area while the threat management plan was being reviewed.

An expert panel was brought together for a Māui dolphin risk assessment workshop. The results of the workshop informed the development of the options for Māui dolphin within the threat management plan consultation document.

Submissions sought by DOC and MPI in relation to establishing interim measures to protect Māui dolphin in Taranaki.

Note: This links to our Cerberus download site. Get help on downloading files.

A DOC-commissioned study on Māui dolphin reported that there may be around 55 adult Māui dolphins remaining, with 95% confidence that the number of dolphins over 1 year of age is between 48 and 69.

Bycapture of a Hector's or Māui dolphin reported off the Taranaki coast.

Commercial set-netting restrictions as proposed in 2008 were reinstated after the original decision was reconsidered. 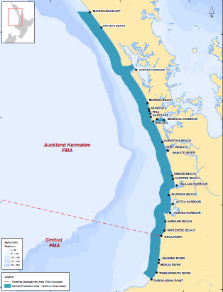 Submissions from the public and stakeholders regarding the threat management plan were analysed by DOC and MPI. Based on these submissions, a range of conservation actions were proposed and implemented to manage fishing and non-fishing threats:

University of Otago researchers estimated the population of Māui dolphin as 111 (95% confidence interval of 48–252) based on extensive aerial surveys.

Set-net controls to protect Māui dolphins were introduced by the Ministry of Fisheries on the west coast of the North Island.

Research on Hector’s and Māui dolphin

Research and scientific studies are essential to better understand these dolphins and support the long-term recovery of their populations.

The threat management plan is a planning framework to manage human-caused threats to Hector’s and Māui dolphins.