Unique to New Zealand, the hoiho, or yellow-eyed penguin, is thought to be one of the world's rarest penguin species.

Yellow-eyed penguin/hoiho adults and chick (MP3, 2,417K)
02:34 – Parents calling in the vicinity of the nest and feeding chicks.

The Māori name hoiho means 'noise shouter', referring to their shrill call made at breeding sites. An alternate name for some iwi is 'tarakaka'.

In 2000, the total number of individual penguins was estimated between 6,000 to 7,000 mature individuals1. The key figure used to assess population size is the number of breeding pairs.

Monitoring, research, and intensive management are carried out by community groups and DOC on Banks Peninsula, in North Otago, Otago Peninsula, the Catlins, Stewart Island/Rakiura and Codfish Island/Whenua Hou. Some sites have been monitored annually since the early to mid 1980s.

Due to the isolation of New Zealand's Subantarctic Islands, only a small amount of research and monitoring has been done on Campbell Island and the Auckland Islands. Research trips in 1987, 1992, 2008-2009, and more recently have yielded snapshot information about the health and status of these Subantarctic populations.

In the 1980s, research and monitoring on the Otago Peninsula indicated that the number of breeding pairs had declined significantly, leading to fears for the future of the mainland population. In addition, predators were killing up to 60% of chicks at some sites2.

A steep decline in nest numbers throughout the 1980s, followed by a mass mortality event in January 1990 reduced the total number of nests to as low as 140 pairs on the entire Otago coast in the following season. Since this time nest numbers have fluctuated between 400 to 600 pairs. 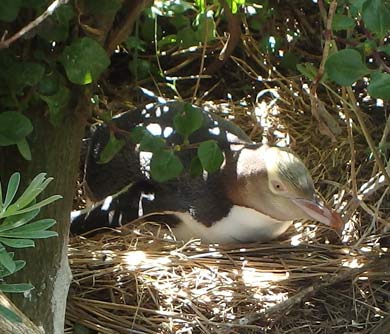 In the 2016/17 season, there were approximately 266 breeding pairs on the South Island coast. The steep decline in nest numbers was the cumulative effect of another unidentified mass mortality in January 2013, widespread starvation in 2014, and an increase in predation by barracouta in early 2015.

Inappropriate behaviour by visitors to yellow eye penguin habitats is an increasing threat to nesting and moulting birds.

Poor use of selfie sticks and people entering nesting areas is causing stress to nesting penguins. This may also lead to adults delaying returning to their nests when people are present. The presence of tourists can also affect chick survival rates and recruitment of new breeders.

In years of poor food supply, a missed meal for a chick may be life or death.

Each autumn penguins replace all their feathers in a process called the moult. During this time penguins must sit ashore for 25 days to grow new feathers, and are unable to go to sea. The moult is a very dangerous time for them because disturbance can lead to increased stress and potentially permanent damage to new feathers. Where yellow eyed penguin moult in areas where they can be disturbed DOC staff and the Yellow-eyed Penguin Trust will move them to safer habitats.

The yellow-eyed penguin is equally dependant on marine and land habitats, which include forest and coastal scrubland. Habitats adjacent to the coastline that have been burnt or developed for farming restrict nesting options.

A great deal of community effort has been put into providing nesting sites and shelter on grazed pasturelands on the Otago Peninsula and North Otago. These habitats provide nesting opportunities, as well as social areas and loafing space, and a space to take refuge during the moult each year.

Yellow-eyed penguins are solitary creatures that seek privacy. They will walk up to one kilometre inland to find nesting sites. A major focus for their conservation has been on replanting coastal sites with native shrubs and plants, and providing nesting boxes as alternative habitats.

The yellow-eyed penguin's marine habitat is equally important because it provides food, and allows for dispersal and movement between land habitats.

Yellow-eyed penguins are not suitable for holding in permanent captivity.

Dogs are a predator of hoiho on land, killing chicks, juveniles and adult penguins. The most critical time for owners to control their dogs is during the moulting period, from February to April each year, as moulting hoiho can be found on any coastal beach.

Natural predators include barracouta, sharks, seals and sea lions. Injuries from barracouta are the most common, with bites to the feet, legs and abdomen eventually becoming fatal if left untreated.

Disease is a major threat to chick and adult survival. Two diseases affect survival of chicks: avian diphtheria (also known as diphtheritic stomatitis), a bacterial infection of the mouth; and Leucocytozoon, a protazoan parasite of the blood and organs. 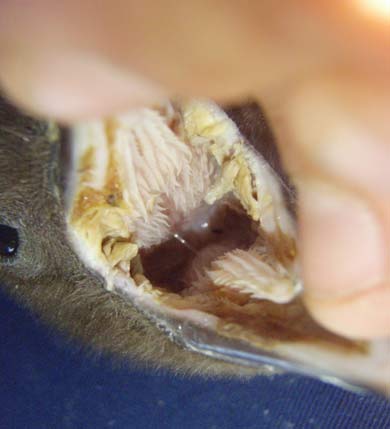 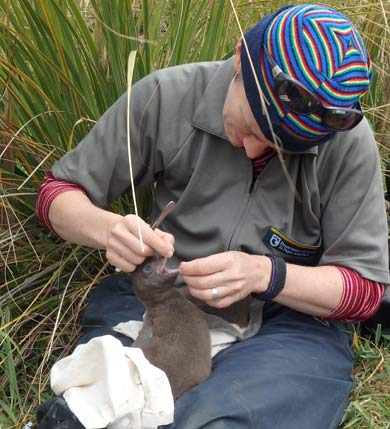 In 2004, up to around 90% of the mainland and Stewart Island chicks were infected with avian diphtheria. More than 50% of chicks died from this disease. Outbreaks of avian diphtheria tend to occur every second season, and research into prevention is ongoing.

A new disease, Leucocytozoonosis, was identified during the 2005 season that caused mortality of chicks on Stewart Island. Yellow-eyed penguin chicks on the Auckland Islands were also found to be infected with Leucocytozoon during disease screening in 2008.

There have been three unidentified mass mortality events that have killed large numbers of breeding adults and juvenile birds in 1990, 1996 and 2013. It is assumed that a marine biotoxin was responsible for these extreme events, but post mortems and lab tests did not pinpoint the toxin involved.

The Recovery Plan consists of nine key objectives that will promote the recovery of hoiho populations throughout their range. It also outlines different management options, and a work plan. The long-term vision of the recovery plan is: 'hoiho populations have increased and the community is actively involved in their conservation.'

The progress against the objectives of the current Hoiho Recovery Plan will inform any new conservation management plans for hoiho.

During 2011, DOC scientists attached dataloggers to penguins at Stewart Island/Rakiura to record the depth, length and shape of their dives during one feeding trip in the sea nearby.
Penguin diving behaviour and ecosystem monitoring factsheet (PDF, 10,220K)

Yellow-eyed Penguin Trust (YEPT) and DOC, with other key groups, have been involved with penguin monitoring.