Kākāpō Hoki uses a door in her pen. She now lives in the wild
Image: Gideon Climo | DOC

Meet some of the stars of the kākāpō population.

See a complete list of kākāpō names on Wikipedia and an interactive family tree at Tableau.com. 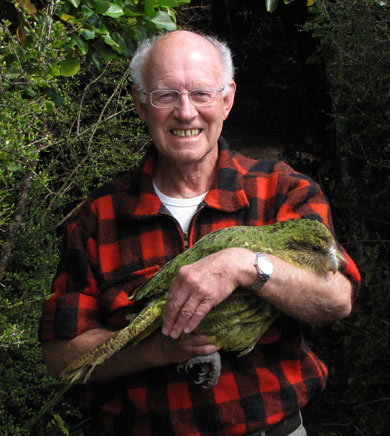 Conservationists found Richard Henry living in Fiordland, more than 1,000 m above sea level. His home was bordered by the sheer walls of the Gulliver Valley.

He was the last surviving Fiordland bird, so his DNA was crucial in ensuring genetic diversity in the kākāpō population. In 1998, Richard Henry fathered three chicks to Flossie on Maud Island.

He seemed to boom in a different dialect to the Stewart Island/Rakiura birds. He made single, widely-spaced booms and he didn’t ching. His colouring was different too – brighter green with bold yellow markings.

He seemed to have been in semi-retirement towards the end – he didn’t boom during his last ten years. He was thought to be around 80 years old when he died.

Richard Henry was named after the pioneer New Zealand conservationist who first tried to safeguard kākāpō from predators more than 100 years ago. 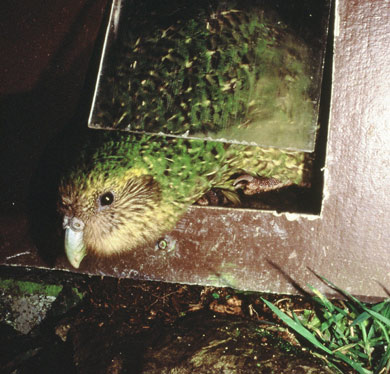 Kākāpō Hoki uses a door in her pen. She now lives in the wild
Image: Gideon Climo | DOC

Hoki was the first kākāpō to be partially reared in captivity. She provided us with a special opportunity to observe kākāpō habits and behaviour.

Natural food supplies failed when Hoki was five weeks old, so her mother Zephyr couldn’t feed her enough food. She was hand reared for eight weeks at Auckland Zoo, then grew up in captivity on Maud Island for five years.

We soon learned how intelligent and entertaining kākāpō can be. Hoki created her own amusement, springing up and down on branches, and often playing with our buttons and zippers. She also provided insights into kākāpō biology and development. We watched her learning to call and display as she would in the wild.

Hoki now lives in the wild. She can be bad-tempered with us now, perhaps because she became used to having her own way in captivity. She will wriggle and grumble and bite while being held, and make a fuss when things are not going her way. But she can be kinder to new faces, occasionally coming straight out to feed from her hopper while volunteers are still close by.

Hoki bred for the first time during the 2002 breeding season. She laid one egg, which died early in incubation. She was given a foster egg to care for and, with a little help from her human friends, successfully reared a healthy chick: Al.

She didn’t breed in 2005 or 2008. In 2009, she laid a single infertile egg and was given another opportunity to foster. She looked after two of Hananui’s chicks for a short period before they were collected for hand rearing due to a rimu crop failure.

Sadly, Hoki passed away in April 2019. She developed a serious infection and, despite Auckland Zoo's best efforts, had to be euthanised. Hoki did an amazing job raising two chicks during the 2018/19 breeding season and is missed by many. 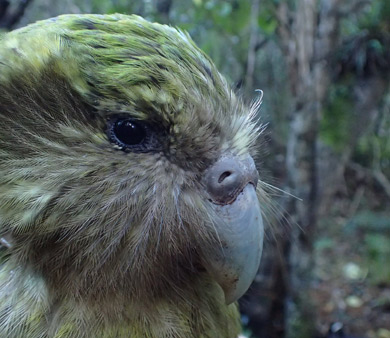 Solstice was the lucky last kākāpō found on Stewart Island/Rakiura. It had been five years since we’d found kākāpō there.

We found a few kākāpō feathers near a long-disused track and bowl site, close to an area we had previously found the birds. It was breeding season, so Solstice was probably looking for a male. It shows how difficult it is to find wild kākāpō, even in an area they’ve been known to inhabit.

Solstice is one of the largest female kākāpō, often weighing 2 kg even without the help of supplementary feeding.

She laid three fertile eggs after mating with Felix in 2002, but all the embryos died early in incubation – possibly a genetic fault due to inbreeding. Although relatively inbred, Solstice has no other first-order relatives descending from Stewart Island/Rakiura, so must retain her genetic diversity.

She mated again with Felix in 2009, and this time we took the chance to intervene. We artificially inseminated her with fresh sperm from three males: Arab, Smoko and Stumpy. The three eggs laid were the first kākāpō eggs ever to be fertilised through artificial insemination. Two eggs were Smoko’s and one was Arab’s. One embryo died very early in development, and Arab’s died prior to hatching. However, Ra – a female – hatched and was hand reared successfully.

In 2011, Solstice laid a further three eggs. We attempted artificial insemination, but it was unsuccessful. Luckily though, she decided to mate again. The father of her three chicks was Waynebo, a founder bird from Stewart Island. He died the following summer. Solstice’s daughters Stella and Ihi were hand reared and her son Komaru was reared by Rakiura.

Solstice has struggled to rear chicks herself. She doesn’t appear to transfer food to her chicks successfully, so we’ve had to remove them. Perhaps it’s due to inexperience, egg failure and rat predation in the past.

The kākāpō team will continue to work towards improving Solstice’s mothering skills at the next opportunity, by giving her a four to five-day-old chick, rather than allowing to hatch her own. This method proved successful for another mother in 2011.

Solstice was named after her discovery date:  21 June 1997, the winter solstice. All her offspring have celestial-themed names. The word mōrehu means survivor, and that’s what Morehu is. His egg was laid on Pearl Island, where rats and weka pose a big threat to eggs and chicks. His mother Sandra was there temporarily during the rat eradication operation on Codfish Island/Whenua Hou. We moved the egg to Te Anau to be hatched in safety.

A day after hatching, we found Morehu had an internal blockage. For his first week he had to hang on to life without growing.

Ten days after he recovered from the blockage, his incubator malfunctioned. His growth was halted again, but he tenaciously hung on to life. He was a quarter the size of other chicks his age, so we nicknamed him Bonsai. He still had a lot of energy and was always eager to feed.

Eventually, we decided to put him on a course of steroids, and his growth shot away in bursts.

Today, Morehu is the same size as other adult kākāpō. He even practised booming in January 2007 on his home of Anchor Island. He remembers his early contact with people, visiting staff when the mood strikes him.

Morehu was named by Kate Hutchison during a competition.

The history of kākāpō

Discover the dramatic history of kākāpō, from despair to hope.