Sinbad, one of our adoption kākāpō.
Image: Andrew Digby | DOC

Kākāpō adoptions make great gifts – you'll receive a soft toy, personalised certificate, bookmarks and stickers, and best of all you'll be contributing to the conservation of this unique species.

To receive your adoption pack in time for Christmas, make your purchase before Friday 26 November.

You’ll get a digital certificate within two weeks so you have something to gift to the recipient if your package doesn’t arrive on time.

We will make every effort to get packages in the post in time for Christmas, but we cannot guarantee that packages will arrive in time. This is due to differences in delivery time, and unknowns around the impact of COVID-19 on post times.

You’ll get a digital certificate within two weeks so you have something to gift to the recipient if your package doesn’t arrive on time.

There are only 201 kākāpō alive today.

The symbolic adoption of a kākāpō is a great way to support the important work of Kākāpō Recovery.

How your contribution helps kākāpō

All profits from the adoptions scheme contribute directly to the conservation of this unique and remarkable species. This includes funding monitoring equipment, supporting current research objectives and contributing towards the management of breeding seasons.

We have selected 10 kākāpō with unique stories to act as ambassadors for the species. You can adopt them below.

You can choose to receive either a physical or digital adoption pack.

You can also help by sponsoring a takahē. 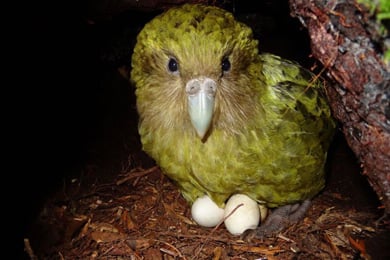 Kuia is the only daughter of the last Fiordland kākāpō, Richard Henry, so she carries rare genetic diversity that we want to see passed on through her offspring. Thankfully, Kuia is proving to be a good mum who learns quickly from mistakes.

She first bred in 2016, but unfortunately decided to nest in the middle of a sandfly-infested seal colony. The disturbance led to her accidentally damaging one of her eggs, so the team decided to remove the eggs for artificial incubation and close the nest. 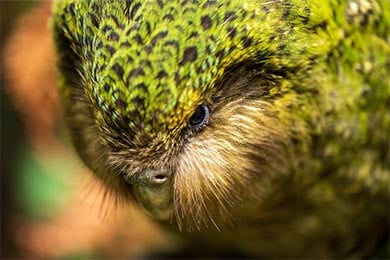 Rahotu is a grandson of Richard Henry, the only Fiordland kākāpō to contribute his genetics to the current kākāpō population. Rahotu was fathered by Sinbad with the help of artificial insemination, a tool that the team uses to ensure genetically important and underrepresented males produce offspring.

Rahotu was also one of the chicks affected by the fungal respiratory infection Aspergillosis during the 2019 breeding season. He was treated by the veterinary team at the Dunedin Wildlife Hospital where he fortunately responded well to treatment, while also picking up a reputation as something of an escape artist! He has matured into a handsome bird with a great personality, and has his father’s beautiful bright green plumage.

Hatched: Te Pākeka/Maud Island, 13 March 1998
Mother: Flossie
Father: Richard Henry
Named after: The Sinbad Gully in Fiordland, near where his father Richard Henry was first discovered, and one of the last refuges for kākāpō on the South Island of New Zealand.

Sinbad had a challenging start to life. He was the youngest and smallest of three chicks hatched to Flossie and Richard Henry in 1998, and was removed from his nest to be hand-reared once it became clear he was not getting enough food.

While on a plane to the hand rearing facility in Te Anau he developed respiratory problems, but was saved by a quick-thinking flight attendant who fitted him with a modified oxygen mask. These days, Sinbad is a curious bird that will often investigate team members and equipment that he finds in his territory.

He has immaculate plumage and large eyes, and since 2009 has mated on three occasions, but first achieved fatherhood in 2019 via artificial insemination. 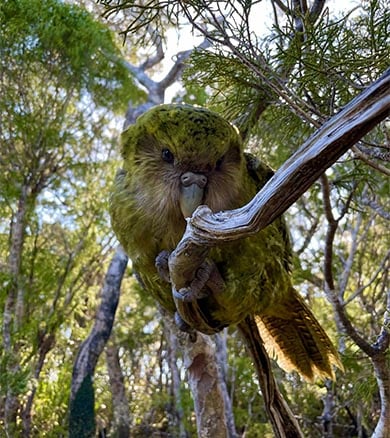 Kumi has always been a big boy. As a chick, he was injured by another kākāpō at just five weeks old, and while receiving veterinary treatment earned the nickname Puku Nui (big belly) due to his size and appetite. In 2019 he was the largest kākāpō on Anchor, topping the scales at 4 kg!

At this weight, male kākāpō in breeding condition become almost spherical in shape because of their fat reserves and large ‘boom sack’. Kumi is an excellent boomer and makes an immaculate bowl, and these efforts have been rewarded.

In 2016 he mated with both Waikawa and Kuia, fathering all their chicks that year. In 2019 he mated with Kōnini three times, totalling over three and a half hours of activity! 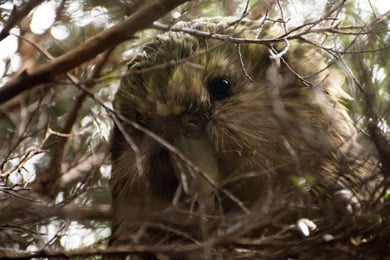 Nora was the first nesting female found on Rakiura, and her capture marked a major turning point in the battle to save kākāpō from extinction.

She hatched three chicks on Rakiura in 1981, including Zephyr who is now a highly productive breeder – many of Nora’s numerous descendants (including her grandson Sirocco) continue the wind theme in their names.

Nora was one of the ‘founders’ moved to Whenua Hou/Codfish Island in 1987, but sadly produced only infertile eggs for several breeding seasons. Despite this she has strong maternal instincts: Nora has fostered many chicks over the years, and was once found incubating a kumara!

In 2016 she bred successfully for the first time in 31 years, producing Kōtiu and Matangi, and these were followed by Gale, Kōraki and Rahotu in 2019. 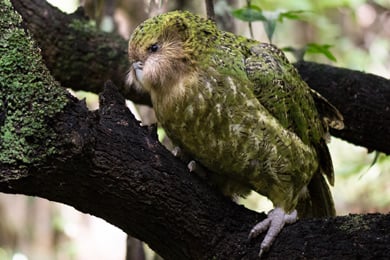 Rangi is a stealthy bird with exceptional skills at evading the team. He went into hiding after being transferred to Whenua Hou/Codfish Island in 1987, and wasn’t found again until 21 years later when a ranger heard booming from a bird that didn’t have a transmitter.

Even today, Rangi proves difficult to catch, as he is always alert and runs for the most dense and tangled patches of bush whenever he hears rangers approach. He can also sneak quietly through the undergrowth to circle back behind rangers that are following him.

Although he hasn’t mated since the programme began in 1995, genetic data show that Rangi previously fathered the successful breeders Wendy and Zephyr (among others), and as a result he has the most descendants of any male kākāpō. 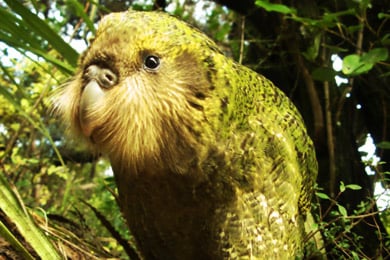 Hatched: Whenua Hou/Codfish Island, 28 March 2009
Mother: Fuschia
Father: Smoko
Named after: The blustery night he hatched on, and the vet who saved his life.

As a chick, Bluster was attacked in his nest by a male kākāpō and lost two toes. He lived to tell the tale thanks to vet Joanne Paul-Murphy, and was given her name in thanks.

Bluster-Murphy had a rambunctious teen stage in which he enjoyed stealing other birds’ food and yelling at older males at their bowls. Once, rangers set up a hopper and were lying in wait to catch another male whose transmitter had failed, and Bluster-Murphy was so drawn by the lure of free food that the team ended up catching him multiple times over the night.

Bluster-Murphy is now a young adult and made his first serious attempt at booming during the 2019 breeding season. He seems unaffected by his mild disability, and thrives in the wild. 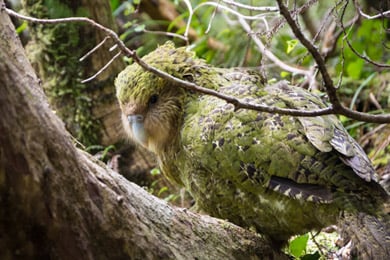 JEM had a difficult start to life. Her mother accidentally dragged her egg out of the nest when it got stuck in her plumage, and it sat in the pouring rain for three hours before being taken to be artificially incubated.

JEM is yet to produce any chicks of her own, though not for lack of trying. In 2019 she laid the first five-egg clutch ever recorded! Sadly these eggs were all infertile, but she proved to be a great foster mum, incubating and hatching eggs and caring for chicks.

JEM can be quite feisty, and has also been known to make the rangers’ lives difficult when she’s due for a health check, often hiding down holes and refusing to move somewhere where they could reach her. 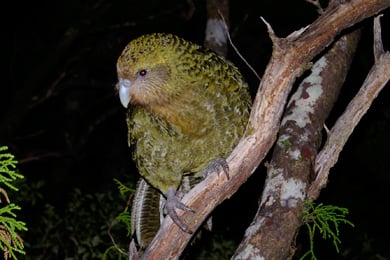 Marama is the smallest and most delicate female in the kākāpō population. She nested for the first time in 2016, and although all her eggs were infertile, she proved to be an excellent mum.

She fostered other chicks and was given the special responsibility of raising Gertrude, a chick with important Fiordland genes. She was calm on her nest, even allowing rangers to check on her eggs and chicks while she was present.

In 2019 Marama successfully produced three of her own chicks and raised two of them herself right through to fledging. Marama is a rising star in the kākāpō population, with great prospects! 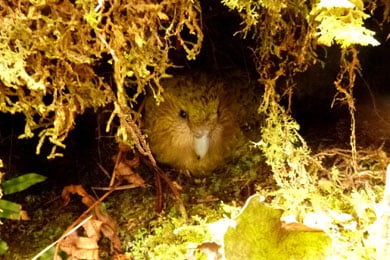 Waikawa was the first kākāpō to hatch successfully from an egg that was artificially incubated for the entire time between laying and hatching.

In 2016, at age five, she also became the youngest female kākāpō to successfully breed. Sadly, an intense period of rain caused a flash flood that destroyed her nest and killed her chicks, except for one only one that had previously been moved to the nest of another female.

This chick was later named Makorea (‘survivor’) in recognition of its lucky escape. In 2019, Waikawa was quick to get started producing the first chick of the season – Kohitātea, meaning the eighth lunar month of the Māori year (approximately equivalent to January). Waikawa also produced four other chicks across two nesting attempts.

There are two ways you can adopt depending on whether you’re adopting for one person or for a classroom.

Adopting as a classroom is for schools only. It allows you to include your classroom name in the adoption certificate, and the number of students in your class so we can include enough materials for everyone.

When you complete your purchase, you should receive a confirmation email from PayPal. Contact us if you do not receive this.

If you have any questions emails us at kakaporecovery@doc.govt.nz

But we may take some time to respond as we receive many emails.

Donate to Kākāpō Recovery. All donations make a difference.