One of the largest seabird in the world, the Northern royal albatross is a graceful giant with a wing span of over three metres.

Along with the wandering albatross, northern royal albatross are one of the largest seabirds in the world.

Royal albatrosses are some of the longest-lived birds in the world, regularly living into their 40s.

One bird at Taiaroa known as ‘Grandma’, raised her last chick at the age of 62.

A storm on the Chatham Islands in 1985 destroyed the albatrosses’ nesting habitat, reducing the percentage of nests producing fledglings to as low as 3% in some years. There are encouraging signs that their population may be recovering from this event.

The nesting area on the headland at Taiaroa Head on the Otago Pensinsula is a 'hot spot' - a sheltered area where summer ground temperatures can reach 50 degrees celsius. These conditions aren't ideal for a genus that's far better adapted to subantarctic conditions, but they chose this place.

In earlier times both adults and chicks could die from heat exhaustion. There is now a sprinkler system that on hot days sprays water over the nest to cool the bird.

Hot conditions during hatching is a major problem as adults will stand up to cool themselves, leaving the egg exposed to risk of fly strike. Albatross chicks can take up 6 days to complete the hatch. Any fly eggs or live maggots laid in the egg during this period will often result in a dead chick.

Staff hatch all the chicks in incubators leaving a dummy egg in the nest. The nest is sprayed with Avian Insect Liquidator (AIL) when the hatching egg is removed and on return of the day old chick who has had AIL applied also. This has significantly reduced fly-strike.

Predator traps for feral cats and mustelids are used for what is probably the longest running predator control programme in New Zealand.

Supplementary feeding of chicks is important if a parent goes missing before the chick fledges. A chick may die of starvation otherwise as it takes two parents all their energy to raise one chick, and then they need a year off from breeding. Increasingly chicks with both parents are being supplementary feed if for some reason the parents do no bring back enough food for them to survive the winter.

Toroa have great spiritual significance to many iwi. For example Moriori of the Chatham Islands wear plumes (raukura) of hopo (the local name for toroa) to signify their allegiance to the pacifist principles of the chief Nunuku Whenua. Taranaki iwi likewise wear toroa feathers to signify loyalty to the Parihaka prophet Te Whiti O Rongomai, a pioneer of non-violent civil disobedience.

Chatham Islands royal albatross populations have a long history of traditional harvesting. By 1921 the birds were fully protected and hunting them was illegal. Applications to harvest albatross have been made from 1993 to the present day. None have been granted.

Toroa return to land only to breed and raise their young – one chick every two years. Royal albatross usually mate for life at the same nesting area each time. Males arrive at the nesting site first to prepare the nest. Male birds usually nest within 100 m of the natal zone.

Parents share incubation duty in spells of two days to three weeks (eight days on average) over a period of about 11 weeks – one of the longest incubation periods of any bird. After making a hole in the tough shell, chicks take about three to six days to finally emerge from the egg.

Parents take turns at guarding and feeding the chick for the first five or six weeks. Chicks are then left unguarded, except for feeding visits, until they fledge at about eight months.

When a chick is fully fledged, it will stretch its wings and with the help of a large gust of wind, take off for its first major voyage. Young albatross spend several years away feeding in South American waters.

After a successful fledging, the parents leave the colony for a year at sea before returning to breed again, completing a two-year cycle. If the pair fails to breed they may return in consecutive years until they are successful.

Adolescents return to look for a mate at 3–8 years of age. They gather on ridgelines where the male birds display their virility by stretching their wings, throwing their heads up and screaming raucously, while admiring females gather round and take part in elaborate courtship rituals. Sound familiar?

Renowned ocean wanderers, royal albatross travel vast distances from their breeding grounds to feed – as much as 190,000 km a year. Royal albatross range throughout the Southern Ocean and are most commonly seen in New Zealand coastal waters during winter.

Birds have been banded on Campbell Island since the early 1940s. Returned bands show young birds and nonbreeders migrate to southern South American waters and back to New Zealand.

In other work, satellite transmitter packages developed by French, British and Australian researchers were used to track the birds’ flight paths. Signals were monitored by satellite and the information used to learn more about the birds while at sea. One bird travelled 13,000 kilometres during a two-week foraging trip.

The following map shows GPS tracks of three adult breeding birds during their foraging trips from Taiaroa Head. They were tracked between February and May 2012. 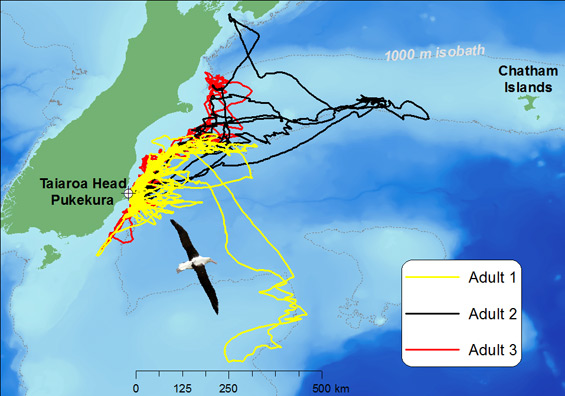