Find out more about wetlands in the Southland region.

More than 80 bird species have been sighted in these places, 65 of which are dependent on the estuarine environment for part or all of their life.

Southland’s estuaries rank alongside Farewell Spit and Lake Ellesmere as the top three wading bird habitats in the South Island.  They are internationally important because from spring to late autumn they become the feeding and breeding grounds for thousands of migratory waders from the northern hemisphere.

Coastal wetlands in Southland are mainly bogs rather than swamps. Bogs contain constantly saturated, stagnant and infertile water, and are characterised by peat and a few well-adapted plants like sphagnum moss. In contrast, swamps are usually fed by rivers and have a flow of water and nutrients through them. Flax and Carex secta are common swamp plants. Many different invertebrates occur in Southland’s coastal wetlands..

Despite their importance as wildlife habitat, wetlands and estuaries are often under-appreciated and degraded through rubbish dumping, agricultural run-off, reclamation, trampling by stock , drainage, fire, extraction of sphagnum moss, and introduction of Spartina.

The view from the summit of Bluff Hill / Motupōhue reveals how dominant estuaries are in the landscape of Southland, and why together they provide such an important habitat for wildlife.

It is possible to see the pattern of vegetation around the head of Awarua Bay and Waituna Lagoon - a natural mosaic caused by differences in salinity and water level, and the regeneration sequences following fires.

The first European explorers of Bluff Harbour identified the trading potential of vast areas of flax.

Tiwai Peninsula, now the site of giant aluminium smelting sheds, was once the site of a workshop where Maori honed tools from flaky, argillite rock. The estuary was an important source of food and a transport route.

To go bird watching at Awarua Bay travel towards the Tiwai smelter from Invercargill until the bridge over Awarua Bay. Turn left before the bridge onto Awarua Bay Road and follow the road to a parking area at Muddy Creek.

To reach feeding areas and roosts walk around the head of the bay and be prepared for some knee-deep wading. Although birds can be seen at any stage of the tide, the best viewing is gained over high tide (1 to 1.5 hours after Bluff).

During normal high tides wading birds roost on two or three raised portions of the mudflats, but at times of severe storm or extremely high tides they may find temporary feeding or roosting areas on nearby pastures.

Awarua Bay is of particular interest because most years it holds the second highest number of waders and a greater number of species than other sites in Southland. It also attracts rare visitors to New Zealand such as Siberian tattler, greenshank and sanderling.  Most migratory waders are present only from October to late March but some of the more common species are present through the winter.

A small population of the endangered southern sub-species of New Zealand dotterel frequents the south shore of the bay in autumn and winter.

The marginal saltmarsh and adjoining peatland vegetation provides feeding areas and nesting cover for other threatened species in the area - Australasian bittern, marsh crake and fernbird.

Waders and waterfowl depend on the mudflat areas, where there is an abundance of worms, crustacea, and small shellfish. Birds such as terns, herons, and shags feed on small fish.

Awarua-Waituna Wetland is a large Ramsar (internationally recognised) wetland site of 20,000 ha. It is an estuarine wetland, frequented by diverse trans-equatorial migrating and wading bird species, as well as threatened plants and insects including sub-alpine species.

Awarua-Waituna wetland has a wide diversity of habitats which means that there is a really diverse range of birdlife, plants, and invertebrates located here. Due to the harsher environment found at this coastal site there are many species of plants and invertebrates found here at sea level which only occur in sub-alpine areas elsewhere in New Zealand.

Intensive land use and the conversion of surrounding catchments to dairying land are considered primary threats to water quality and ecosystems. 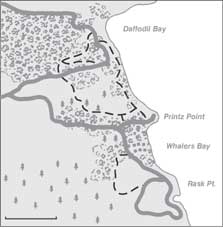 A network of walking tracks around Sandy Point provides an opportunity to view the vegetation types which grow around estuarine areas. At low tide shellfish and mud crabs can be seen on the mudflats. Salt-tolerant herbs and rushes grow close to the tide mark, merging with manuka shrublands and tōtara-dominated coastal forest.

The walking tracks between Daffodil Bay and Hatch's Hill provide good viewpoints over the New River Estuary. The estuary supports the highest numbers of migratory waders of any of Southland’s estuaries. Though their roosting areas are mainly on the opposite side around raised shell banks, good views of feeding waders are usually possible on receding tides, especially turnstones and godwits.

Silver Lagoon, which forms the eye of Sandy Point peninsula, is a favoured habitat for swans and ducks.

Get more information and a map of Sandy Point walks

These relatively small but important permanent wetlands are situated just behind the Ōreti Beach sand dunes, immediately east of the Waimatuku River mouth. They are accessible from the north end of Ōreti Beach or by turning off the Invercargill - Riverton highway at Waimatuku.

The wetlands are protected by a QEII covenant. They have been restored to their original water level, and are the only remaining example of a chain of small coastal wetlands which occurred between Invercargill and Riverton/Aparima.