Skip to content
Last season’s chicks prepare for their first flight. They will spend several years away from New Zealand feeding in South American waters, returning to Taiaroa Head to find a mate
Image: DOC

Taiaroa Head or Pukekura was an important site for Maori and (later) European settlers. Today it is world renowned as the only mainland colony of albatross in the Southern Hemisphere. 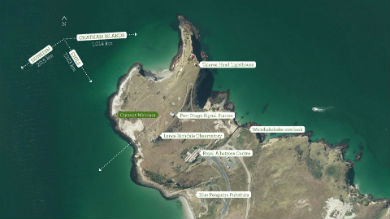 There are around 10,000 seabirds residing on Taiaroa Head/Pukekura. But the birds aren't always around.

Others like the giant albatross prefer certain weather, where there is wind to soar.

Every year about half of the headland's 200 northern royal albatross make landfall for courtship or to nest. With a breeding cycle of 11 months, viewing albatross is almost a year round event.

The Otago Peninsula Trust operates guided tours to the albatross observatory overlooking part of the nature reserve. The Trust also manage the visitor centre situated near the car park at Taiaroa Head.

On windy days, albatross can be seen from the visitor centre gliding over the headland, however, a visit to the observatory is required to see the nesting and courtship activity.

Watch a live stream of northern royal albatross parents and chick nesting on our Royal cam.

Likewise, views of the threatened Otago shags can best be seen from the observatory at Taiaroa Head where their chimney pot type nests are a distinctive feature on the slope below. They are only found between Oamaru and the Catlins and there are less than 3000 of them.

Throughout the year little penguins can be viewed at Pilots Beach on the western side of the headland. At dusk these birds return to their nests after spending time at sea in search of fish.

The Pukekura Trust operates night time viewing for this species and over summer over 200 birds can be seen arriving on the beach. Little penguins nest underground so are only visible above ground at dusk.

Taiaroa Head/Pukekura is a strong-hold for this species on the Otago Peninsula. There are around 600 pairs on the headland with over 350 of these located at Pilots Beach.

Adjacent to the car park on the Eastern side of the headland, spotted shags, royal spoonbills and red billed gulls can also be seen. They nest in large numbers on the cliff ledges that overlook stunning views of the coastline and the Pacific Ocean.

A well formed boardwalk takes visitors along this 100 m viewing area. From here other seabirds can often been seen flying past (gulls, shags, terns). With aid of a pair of binoculars, numerous oceanic seabirds can be viewed offshore (several species of albatross, petrels and shearwaters).

Taiaroa Head's lighthouse is also visible from the site.

Pilots Beach is often the best place to see these species. Keep at least 10 m away from them and if you are in a group do not surround them – they can run fast.

Going inside the reserve

You’re not allowed inside this nature reserve but you go on a tour to the Richdale Observatory and view part of the reserve.

Book a tour are offered by the Royal Abatross Centre.

All drone use must be authorised by DOC

A concession is required to fly a drone on any public conservation land.

Visit shags, shearwaters, penguins and spoonbills in this Meet the Locals video.

Rugged and remote, the perfect location for exploring some of our unique wildlife and history. You may even get to see some royalty…