Fed by two lagoons and the Waiho River, this marine reserve forms a protective buffer for these waterways and wetlands. It lies alongside parts of Westland Tai Poutini National Park and Te Wāhipounamu South West New Zealand World Heritage Area.

“The contrast between the ever restless sea – the gigantic waves coming and going without intermission – and the quiet watershed of Lake Ōkārit[o], with its numerous islands, surrounded by luxuriant forest, was most striking.” – Dr Julius Haast, 1865

Waiau Glacier Coast Marine Reserve is named for its proximity to Franz Josef and other glaciers, which are just 30 km from the coast. “Waiau” is an alternative spelling for the Waiho River.

The reserve extends nearly 11 km south from Kohuamarua Bluff – near Ōkārito – to Omoeroa Bluff, and about 4 km out to sea.

Moraine debris from the glaciers has created distinctive lumpy headlands along the reserve. Over thousands of years gravel and sand have been swept north by the Westland Current, creating a buffer zone against ferocious seas. 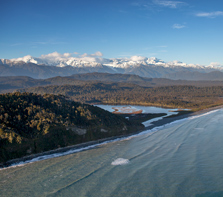 Over thousands of years, gravel and sand have been swept north by the Westland Current, forming a protective buffer for these wetlands and lagoons

Calm wetlands and lagoons have formed within this zone, creating an abundant and distinctive habitat. The reserve itself protects 46 square km of coastal sea beyond these wetland systems, and a short distance up the Waiho River.

Boulder reefs support fish, invertebrates and seaweed which are typical of the mid West Coast, giving way to a sandy seafloor.

The beaches are gravelly and the seabed muddy, a result of runoff from the Waiho River and other waterways in this area, which are constantly fed by glacial flow through thick rainforest. Extreme rainfall events are reasonably common here.

It can be accessed by 4WD from the north, to almost the mouth of the Waiho River. There is good walking access using Three Mile track from Ōkārito, and Neils Creek track (which can also be mountain biked).

The beaches are gravelly and the seabed muddy - a result of runoff from the Waiho River and other waterways in this area, which are constantly fed by glacial flow through thick rainforest

Visitors to should be well prepared with food, water, warm clothing and wet weather gear. You should tell a responsible person where you are going and how long you expect to be away.

You should be aware of possible hazards such as waves on the beach and swift currents in the rivers and lagoon mouths.

Riding of quad bikes and horses is allowed within the reserve, providing there is minimal disturbance to the site and riders comply with legal requirements.

Stones (no more than 256 mm in intermediate diameter), shells, driftwood, sand and gravel can be collected by hand recreationally but only as much as you can carry in one trip and with minimal disturbance to the site.

Pounamu can also be collected but only by members of Ngāi Tahu Whanui, or with the permission of Te Rūnanga o Ngāi Tahu.