Crossing the Brunner Bridge to the historic mine site

Located in Greymouth area in the West Coast region

In 1896, 65 mine workers were killed here in one single explosion because safety wasn’t a priority.

Today, everyone expects to come home safe from work. When the Brunner Mine exploded in 1896 families abruptly lost their husbands, fathers, brothers and sons. This led to new hardships caused by a loss of income, with grieving families struggling to pay for food, clothes, rent or mortgage.

The disaster and the plight of the families caught the attention of the whole nation. It ultimately led to improved workplace safety legislation and practices.

Tohu Whenua are places that have shaped our nation and created our stories. History comes to life at these significant places. Brunner Mine at its peak

Until the 1960s coal was a major source of energy, vital to powering steam engines for factories and transport as well as home heating. Continuous coal production was of the upmost importance to the prosperity of the nation.

In 1896 the Brunner mine was a big producer of exceptionally high-quality coal, bricks and coke (a refined fuel).

The Brunner Mine disaster

On the early morning of 26 March 1896, mine workers tried three times to coax a team of pit ponies (horses used to pull coal wagons) into the mine. Each time the horses got close to the mine entrance they reared and kicked and raced back to the stables. They finally entered the mine once they were blindfolded and lead in backwards.

At 9.30 am a loud explosion from deep in the mine stopped everyone in their tracks. A flame roared out of the mine entrance, followed by a column of choking smoke.

Only after the incident did people recount the effort needed to get the pit ponies to enter the mine. With hindsight this may have been a warning of the things to come. 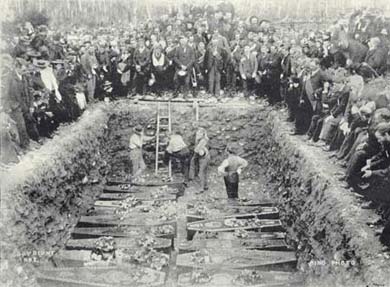 A horror behind the Brunner mass grave is that many bodies were burned beyond recognition and could not be honoured in a personal burial.

Many families faced eviction because the mine company owned their homes and these were needed for replacement workers. Across the country New Zealanders were moved by this tragedy and donated £33,000 in support of the families.

The miners believed the cause of the explosion was ineffective ventilation. A Government enquiry unfairly blamed the disaster on a negligent worker.

In the decades that followed, Brunner and subsequent mine disasters spurred significant changes in our society including stronger unions to give a workers’ voice, political parties that better supported workers, and improved safety legislation.

Today the need is just as strong to keep ourselves, and one another, safe at work.

The Brunner Mine site is 11 km east of Greymouth on SH7 and the main carpark is on SH7. It can also be accessed from Taylorville Road which runs between SH6 (2 km north of Greymouth Bridge) and SH7 but parking is limited. Walk across the Brunner Bridge to access both sides of the river.

Want to understand people better? Visit the places that matter to them. Rebecca O’Brien faces the realities of West Coast life at Brunner Mine.