Located in Tararua Forest Park in the Wellington/Kapiti region

The track can be walked from either direction. Walking south from Scotts Road is easiest for the steepest gradient is then downhill.

The following track description applies to the walk when undertaken from north to south.

A stile crosses the fence and an information sign is located just before the bridge over the Kahuterawa Stream. 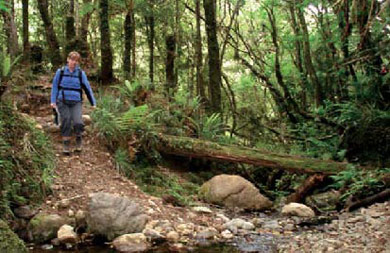 The walk commences following the metalled forestry road alongside the Kahuterawa Stream.

After approximately 40 minutes there is an open clearing where the forest roads fork.The trail is clearly marked taking the right road and passing remains of former farm buildings and yards.

An hour from the start, a second locked gate is passed, the track then climbs steadily and the plantation forest gradually changes to regrowth native bush.

Following along the forest park boundary, views of Kaihinau, the Tokomaru Gorge and the Manawatu Plainare visible to the West. The gradient increases until the signpost and stile marking entry into Tararua Forest Park are reached.

Most of the year the creek is low and easily crossed but as with all back countryrivers and streams, can be hazardous and requires care during periods of rain and high water.

The river is normally between ankle and knee depth but must be crossed with care. The track continues for 15-20 minutes. The trail here is on private land. This area is marked with orange poles through open clearings.

The Tokomaru River is crossed for a second time and re-enters the forest park and the start of the original Burtton’sTrack. Five minutes further on the former Burtton’s Whare site is reached. Considered as midway when going south it is an ideal site for a lunch break.

From here the track is the historical trail built by Jim Burtton almost 100 years ago. It follows up the Tokomaru River.

After another 1½ hours a further stile is crossed as the track passes out of Tararua Forest Park and a cairn commemorating the opening of the trail by the Prime Ministerin February 2006 can be seen.

The final hour of walk, 3.2 km is along the former Tokomaru Valley Road, now closed to unauthorised traffic but sometimes used by registered 4WD vehicles.

The trail ends at the carpark just off the Mangahao Road 7.7km from the Mangahao Power Station, where walkers can have prearranged private transport or a local operator pick them up.

For walkers going from south to north, an extra 1½ hours is recommended due to the uphill climb from the Tokomaru River in the latter part of the walk.

Burtton's Track is now open to mountain bikers, providing an exciting ride. Suitable for advanced riders, it is grade 5 - 6. The track is best ridden in dry conditions from North to South, and includes some river crossings. It is not recommended in wet conditions. Allow 4-6 hours for the trip dependent on your fitness and conditions.

The best option is to ride from Kahuterawa Rd or Scott's Rd to Gordon Kear Forest. It will take around 30 mins to ride through the forestry to the DOC boundary. Over the stile, a descent ending in a river crossing begins. From here on, expect some pushing/carrying on occasions until you get through to the forestry sections on Tokomaru Valley Rd. Once there, keep on the gravel road until it meets Mangahao Rd. Turn right to head uphill to the top of the saddle, then head downhill for approximately 5km to Mangahao Power station and village (beware of cars on this section).

This track is a shared-use path and is part of the Te Araroa walkway. All riders must give way to walkers and show respect to other track users.

From Palmerston North the track can be accessed from Scotts Road leading off Tennant Drive (SH57) 15 km south after crossing the Manawatu River at Palmerston North. The track starts at the entrance to Gordon Kear Forest. There is a carpark on Scotts Road.