Skip to content
The endangered NZ shore plover are just one of the species being established on Mana Island
Image: Jo Hoare | DOC

The conservation work on Mana has included a massive replanting effort, restoration of Waitoko Wetland, the eradication of mice and the building of a "concrete gannet colony".

Was developed by the Department of Conservation in 1998 on the site of a wetland that existed before the island was developed as a farm in 1832.

The name Waikoko or “water of many tui [koko]” suggests the area was once full of flowering harakeke (flax), surrounded by kowhai trees and enlivened with the song of tui. Tui bones were the most abundant of bird remains found in an archaeological excavation of a 15th century midden site by the stream mouth.

It was once also a habitat for paradise shelduck, grey duck, black shag, fernbird, and banded rail. Ancient pollen samples collected from the site indicate that sedges dominated the wetland here before the island was first farmed. A network of drains and close grazing by sheep and cattle over the ensuing 150 years obliterated most traces of the original wetland.

Paradoxically, the few patches of harakeke planted around the margins of the wetland in the 1970s proved to be ideal habitat for the nationally-threatened goldstripe gecko, which is now abundant here. The wetland now provides habitat for brown teal and a range of threatened wetland plants from the Cook Strait and Wellington ecological districts.

With the support of community groups, like Friends of Mana Island and Forest & Bird, the island’s forest canopy is being restored by a massive replanting programme.

The only places where regeneration of native shrubs and trees are actively discouraged are the many historic sites on Mana. These are being maintained as grassland to preserve surface and sub-surface features. It's important also to have open grass areas for the takahe that live on the island. Mana Island plays an important role in the recovery of takahe, a grassland species. 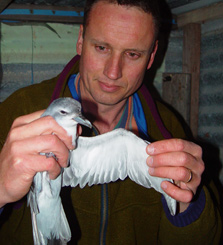 Mana Island’s potential for threatened species conservation was greatly enhanced in 1989/1990 by the eradication of mice which had been present in plague proportions. Fortunately, rats and other introduced mammalian predators had never established on the island.

In 1998 the Waikoko wetland was developed on the site of a wetland that existed before the island was developed as a farm in 1832. The name Waikoko or “water of many tui [koko]” suggests the area was once full of flowering harakeke (flax), surrounded by kowhai trees and enlivened with the song of tui. Tui bones were the most abundant of bird remains found in an archaeological excavation of a 15th century midden site by the stream mouth.

Returning seabirds to Mana Island is an important part of the restoration plan. Burrowing seabirds are "keystone" species for island ecosystems. Their burrows create safe, sheltered and humid homes for lizards, tuatara and insects. Because they feed at sea and nest in dense colonies, they create highly fertile ecosystems by delivering nutrients in the form of droppings, spilt regurgitations, addled eggs and corpses.

A sound system has been installed on the island, playing the calls of seabirds to help lure them there.

A “concrete gannet colony” has been installed above the western cliffs with the aim of attracting gannets to breed there.

And new colonies of seabirds are being establised on the island by transferring chicks from islands in the Marlborough Sounds and tricking them into thinking Mana Island is home. They are placed into artificial burrows and hand fed on sardine smoothies until they fledge.

Diving petrels transferred to the island during 1997–99 and fairy prions transferred during 2002-2004 have returned there to breed.

Fluttering shearwater chicks began being introduced from January 2006. As with previously transferred seabirds, the birds are expected to return after about three years at sea.

Nationally-endangered shore plover from captive breeding facilities are also being transferred to the island, to establish a population there. Shore plover occurred throughout New Zealand until the mid-1800s. Introduced predators wiped them out on the mainland and they were reduced to about 130 birds on Rangatira (South East) Island in the Chatham Islands.

Read a review of the Mana Island ecological restoration plan.

There are a number of ecologically-important fresh and saltwater wetlands in the Wellington region, many of which can be visited by the public.