Whangamarino Redoubt was established by British forces in August 1863 as a forward position from which to bombard the first major Maori defensive position at Meremere during the Waikato War of 1863-64.

In mid-1863, with a British invasion of the Waikato imminent, Māori forces led by Te Huirama (Ngāti Mahuta), re-occupied a long abandoned pa (Te Teoteo’s Pā) and used it as a base while they established defensive positions along the Koheroa Ridge to the north to repel the advance of the British.

But outnumbered and outgunned, they were soon forced to retreat south. The British occupied the pā and built the Whangamarino Redoubt nearby. After a frustrating month-long wait for long-range guns, British troops finally hauled two hefty 40-pounder Armstrong guns up into the redoubt from the gunship Pioneer. This modern artillery, with its 3 km reach, was soon bombarding the first major Māori defensive position at Meremere on the south side of the Whangamarino swamp. 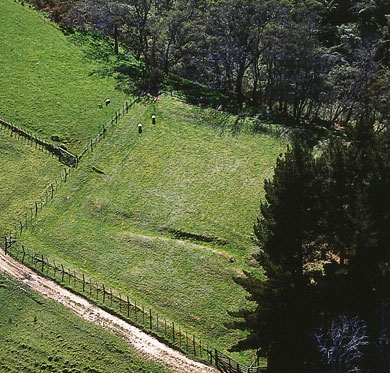 The pā at Meremere was held by 1000 warriors from every tribe that supported the Māori king – some from as far away as Taranaki. It boasted an intricate series of trenches dug into the hard clay. The Māori force had three small ships’ cannons – given to iwi by a trader, hauled overland from the west coast settlement of Maketu (Raglan), then brought downstream by canoe.

In the spring of 1863, the roar of the Kingite-manned guns on the Meremere ridge echoed up the river valley. At one point they fired for two hours on the Pioneer, which had steamed upriver on a reconnaissance trip. But, as one correspondent on board noted, most of the shots fell short or simply 'pattered on the iron plating' of the ship’s armoured sides. 'No-one was struck,' he wrote, 'while the natives expended their ammunition in vain.'

But it was a defiant reply to fearsome shelling from the attacking British forces supported by gunboats on the river.  A former East India Company gunner living in the Waikato had been forced to train the warriors to use them. But the Kingites had no ammunition. Instead, they loaded their weapons with iron chain, nails and pound weights.

This mismatch of military strength was the key to British victory at Meremere – though in the end it was a bloodless one. After several days of shelling, imperial troops bypassed the pā in the gunboats, and were landed upstream from where they stormed the pā but found it abandoned – the Māori defenders realising their position was outflanked. Spring floods had aided the retreat: Māori had been seen paddling eastwards across the surrounding lagoon. The soldiers occupied the hill, and built a redoubt on the highest point.