Te Teoteo’s Pā was an old fortification, reoccupied by Māori forces as a base to repel the advance of British troops into the Waikato. 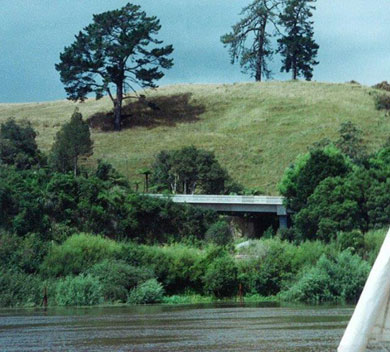 The Waikato Campaign of 1863-64 was one of the major campaigns of the New Zealand Wars. Over 12,000 British and Colonial troops invaded the Waikato, where King Tāwhiao and his supporters were centred.

Te Teoteo’s Pā, an old pā, was occcupied by a small Māori force led by Te Huirama to repel the advance of British troops from Queens Redoubt. After several skirmishes on the Koheroa Ridge to the north, resulting in the death of 30 Māori warriors, Te Huirama's men retreated south. British forces occupied the abandoned pā and built the nearby Whangamarino Redoubt from where they bombarded the Māori position at Meremere.

The pā, situated on the end of a ridge overlooking the Waikato River, affords magnificent views. To the south, behind the former Meremere power station, you can see Meremere Redoubt, and visualise the opposing forces readying for battle.

While its features are now hard to distinguish, the pā  and the neighbouring redoubt are significant sites associated with the Waikato Campaign, and are regularly visited by those interested in the New Zealand Wars.

The site is maintained in grass to stabilise the earthworks and allow visitors to gain some appreciation of how the defences worked.