Located in Pirongia Forest Park in the Waikato region

This loop walk passes through ancient forest with towering trees and a beautiful stream - with interpretation signs as well this is a great option for children. 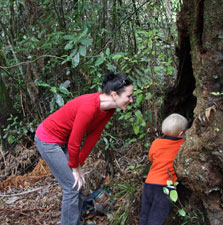 Exploring on the Mangakara Nature walk

The walk meanders through an ancient forest, with large rimu, kahikatea, tawa, pukatea and kohekohe and takes you to the beautiful Mangakara Stream before looping back.

There are numbered posts at points of interest along the walk. There are also illustrated signs to further your understanding and appreciation of this special place.

It's accessible to people of most ages and fitness levels but is not suitable for wheelchairs or pushchairs. Seats are located around the walk. 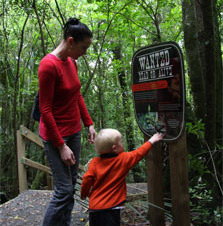 Numbers correspond to posts on the walk and to the map included in the factsheet above.

The tall miro tree to the right of the track is a member of the podocarp family. Its bark falls off in small flakes creating a distinctive ‘hammered’ look. If you look on the ground and you’ll probably find a fallen twig. Notice how the sickle shaped leaves form in two rows on either side of the stem. In autumn, the miro produce small reddish-purple fruit that kererū often feed upon (the kererū or NZ pigeon is also known as kūkū or kūkupa depending on where you live). The kererū has a critical role in the health of NZ forests being the only bird able to disperse the large seeds of trees like miro, karaka, taraire and tawa. The kererū is threatened by rats, mustelids and possums which predate its nests.

Looking up at the rimu

This tawa fell during a storm in July 2000. It lies here as part of the natural cycle, to decay and return essential elements to the soil and forest. Beetles and termites start the decay process, which have bacteria in their guts that break down the cellulose of wood. The holes and channels made by insects and their larvae are then enlarged by fungi. Water percolating through the channels and gaps then softens the wood, paving the way for attack and decomposition by microbial action. Tawa is one of the most common canopy trees in the Park.

Look for the unmistakable olive-green drooping foliage and grey-brown slabby bark of rimu. These magnificent ancient members of the podocarp family have had pollen tracked back 70 million years, and can grow to over 50m tall. Notice and be aware of the epiphytes growing above you in the branches of the rimu. Also known as ‘widow makers’, these perching plants can fall to  the ground with dramatic effect especially if there has been heavy wind and rain.

From this station you should be able to identify the different forest layers. Look down the valley and you will see a layer of ferns, shrubs and seedlings. A subcanopy of tree ferns, nikau and small trees shelters the shrubs. The next layer is the canopy; here it consists mainly of tawa, pukatea and rewarewa. Emergent podocarps, like this rimu, stand out above the canopy.

You are standing in front of a kahikatea, NZ’s tallest native tree - it can grow to over 60m. The buttressed trunk and flaky grey bark are distinctive features of the kahikatea. The buttresses give the tree support in swampy habitat. The small red and blue berries were traditionally eaten by Māori. In the 19th and 20th centuries many kahikatea forests were logged and converted to land for dairy farming. The odourless timber was milled to make butter boxes for exporting dairy products to Britain.

This vigorous, spreading herb grows best in damp, shaded areas in lowland forests and is only found in the North Island. Its distinctive bronze and green leaves were used by Maori for wrapping kumara for the hangi. Please note the track sign across the bridge and veer right to stay on the Nature Walk.

This leafy green tree is something of an oddity. It is in fact two trees - mahoe and kohekohe. They have grown so closely together that they now appear to be one. Mahoe grows to 10m, making it the largest violet in the world! Its long smooth leaves are dark green on top and light green underneath. Mahoe is also known as ‘whitey wood’ because of the colour of its bark, though in this example the trunk is green with moss. Look out for the distinctive mahoe leaf skeletons lying on the forest floor.

Kohekohe has a large, glossy, broad leaf and its flowers grow directly out of the trunk. Kohekohe are a favourite food of possums and many trees have been killed by possum damage.

No one is sure how this large boulder came to be here. It may have been thrown out in one of Pirongia’s eruptions, though they were generally not very violent. It appears well worn by flowing water, so may once have been part of a stream bed.

The leaves of rewarewa (also known as NZ honeysuckle) change as the tree ages. In young trees the leaves are longer and sharply toothed. Mature trees, like this one, have shorter, coarsely toothed leaves. Rewarewa have striking red flowers that are rich in nectar which is an important food source for tui and bellbirds.

On either side of this post you will see long black vines known as kareao or supplejack. This vine was called supplejack by the crew of Captain Cook’s ship. ‘Supple’ because it bent in many directions, and ‘jack’ because it was useful for many tasks.

A single vine can have up to 50 branches, making parts of the forest impenetrable. Maori used kareao for ropes and woven baskets. Another vine, kiekie, also flourishes here. It has whitish, ringed stems and long, blade-like leaves, often with orange blotches. Kiekie grows on tree trunks and the forest floor. Maori prized its tasty fruit and kiekie is also said to be the food of the Patu Paiarehe, the ‘people of the mist’. These mythical, fairy-like beings from the peaks of Pirongia reputedly emerge only under cover of darkness or in thick mountain mists.

Looking in the stream

Look closely at the colourful rocks in the stream bed. These have been washed down from Pirongia’s volcanic slopes and most are very hard.Life flourishes in this stream, though at first glance it may not be obvious.Touch the rocks and feel the slippery algae growing on them. Hiding between the rocks you might see the larvae of insects like caddisflies and stoneflies; these are an important source of food for the kokopu, a small native trout. Koura (native freshwater crayfish) and eels live in areas of slow-moving water. 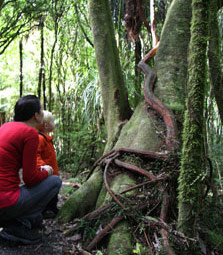 Looking at the rata vine

A feature of pukatea is protruding flange-like buttressed roots that provide support and absorb oxygen. Mature trees reach a height of 35m. Maori used the juices from the bark of pukatea to alleviate toothache and constipation.

The reddish-brown roots descending down the rear side of the trunk belong to a northern rata which has begun life as an epiphyte. A wind-blown seed may have landed in the fork of the tree or another epiphtye growing in the pukatea. The rata has sent its aerial roots down to the ground which will eventually enclose around its host. The northern rata can grow to 25 metres with a trunk of 2.5 diametres.

There are several nikau palm to the left of the track. The nikau is NZ’s only mainland native palm and the most southern naturally growing palm in the world. Its name can be translated to mean ‘barren coconut’ as it bears little fruit in comparison to its well-known relative. The heart of the developing leaves were occasionally eaten by Maori, but as this killed the tree it is no longer permitted. The colourful nikau berries are edible but they are very hard. They are often eaten by kaka. The nikau is very slow growing. It can take 40-50 years to form a trunk and 200 years to grow 10 metres.

Des Williams takes a 30 minute drive out of Hamilton to walk the popular Mangakara Walk in Pirongia Forest Park.