Spend the night in the historic Dynamo Hut on the dramatic site of the first industrial use of electricity in New Zealand. 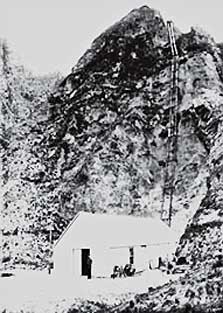 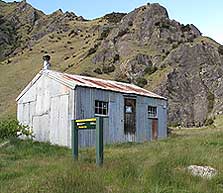 The Bullendale gold mine high above Skippers canyon may seem a surprising site for the birthplace of industrial hydroelectricity in New Zealand.

In 1886 a hydro plant was built at Bullendale to power the gold stamper battery at one of the most inaccessible goldfields in the country.

This industrial use of electricity was close to a world first. It is hard to imagine the tons of hydro equipment being dragged up the treacherous Skippers ravine on narrow pack tracks. Water flowed down pipes fixed to the 60m cliff face to drive the Pelton wheels and dynamos placed at the cliff base.

Electricity was then transmitted by number 8 copper wire over a high ridge to the battery 3 km away in Bullendale. This was the first transmission of electricity over a distance in New Zealand.

Bullendale is a site of international importance as it is among the oldest surviving hydroelectric sites in the world.

Spend the night on site in the historic Dynamo Hut, likely to have been the hydro manager’s house and now a cosy well-set-up character hut for 6-8 people. This is one of the great backcountry huts – an impressive vista of rocky crags, pounding waterfall and beech forest right on your doorstep.

As part of celebrations marking 100 years of electricity in New Zealand the dynamos were partially restored in 1986 and returned to their original position at the foot of the rock face.

Video of Bullendale hydro mine

There are a number of power generation sites on lands managed by DOC including the Dawson Falls Power Station which is still operating.