Curlers at Oturehura in the 1930s with train in background

The first European settlers in Central Otago came to the district in the 1850s as sheep farmers. People flocked to the area after the discovery of gold in 1861 at Gabriells Gully. The region prospered and in 1891 work began on a railway that would link Dunedin, then the country’s largest city, to the goldfields.

The ‘mile a year’ railway

It took dozens of labourers, stonemasons, blacksmiths and engineers 16 long years to build the 150km of railway from Middlemarch to Clyde. The railway linked economic and cultural life throughout Central Otago, bringing essential supplies to one of the countries most isolated regions.

The railway had a huge impact on the local economy and towns such as Ranfurly sprung up along the line. While Ranfurly thrived, Naseby, which had been the major Maniototo township, declined. This was the fate of several towns further away from the railway route.

A return to farming

Eventually gold production declined and farming was once again the region's main industry.

In 1990 the 150 km stretch of railway from Middlemarch to Clyde closed and the line was pulled up. In 2000 this section of the line was officially reopened as New Zealand’s first rail trail.

Since opening, the rail trail has attracted thousands of visitors to the area each year, providing job opportunities and revitalising the regions economy.

Highlights along the rail trail include: Tunnellers Camp, the art deco town of Ranfurly, the Poolburn Gorge, and the iconic Wedderburn Station made famous by Graham Sydney.

DOC has a strong partnership with the Otago Central Rail Trail Trust. The Trust has been instrumental in the success of the rail trail, raising funds for upgrades, and contributing voluntary labour.

Upgrade work has included re-decking bridges, and installing signage, interpretation panels, toilets and shelter sheds along the track. A particular challenge has been experimenting with methods to improve the rough surface of the old railway to give cyclists a smooth ride. 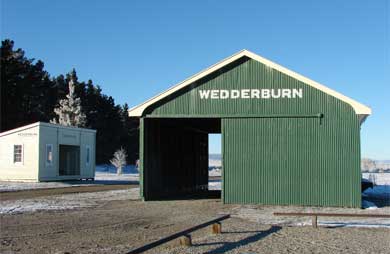 Together the Trust and DOC have worked with local communities to bring back and preserve railway heritage, such as the iconic Wedderburn Station goods shed.

The community rallied together to get the shed, which was made famous in the Grahame Sydney painting 'July on the Maniototo', returned to its original site. The accompanying station building was also returned to the site and restored.

The rail trail has revitalised the region’s economy by bringing a huge number of people to the area and providing employment opportunities in local communities.

The Trust and local communities work closely with DOC to contribute to the upkeep and enhancement of the trail.Opportunities exist for companies or organisations wanting to be involved in conservation to help DOC undertake this work.

The following publications were commissioned by DOC.

Hamel, J. (2001) The archaeology of Otago (Department of Conservation, Wellington).