Located in the Northland region

The Kororipo-Kerikeri Basin is internationally of cultural and historical significance. The wider Kerikeri area offers a variety of great walking tracks and other recreation opportunities.

Find things to do and places to stay Kerikeri area 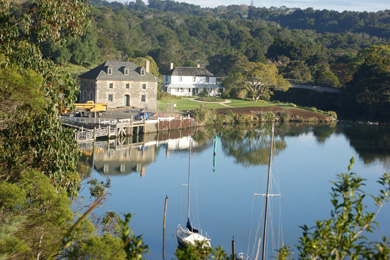 The Kororipo-Kerikeri Basin is culturally and historically one of the important places in New Zealand because it is where the country's two major cultures first met and lived, worked and traded together.

It is internationally significant because unlike many other early meeting places between European and indigenous people - which have changed over time - Kerikeri remains much as it was in the first half of the 19th century.

The three places of importance are Kororipo, Ngapuhi chief Hongi Hika's strategic coastal pa site; the Mission (or Kemp) House (1822) the oldest building in New Zealand; and the Stone Store (1836), built by the Church Missionary Society which had been invited by Hongi Hika to establish a mission.

Kororipo pa was the centre of the 1820s musket war campaigns, which changed the New Zealand landscape and populations. The pa was named Kororipo for the ‘swirling waters’ or whirlpool, which it, and the buildings, overlooks.

Kerikeri is in the Bay of Islands, on Northland’s East Coast, approximately 30 minutes’ drive from Paihia, and at the head of the navigable, cork-screw Kerikeri Inlet.