Located in Kahurangi National Park in the Nelson/Tasman region

The Wangapeka route crosses Kahurangi National Park, from the Waimea Basin in the east to the West Coast near Karamea. It crosses two saddles, each of over 1,000 m, and travels through the beautiful beech-forested valleys of the Wangapeka, Karamea, Taipo and Little Wanganui rivers.

The route is described here from east to west. Times given are estimated for a reasonably fit party. True right is the right-hand side of a river as you face downstream.

This section is classified as a tramping track. Find out more about track categories.

The track follows the river to Kings Creek Hut. Approximately 1 hr 30 min from Rolling Junction road end, carefully cross the debris from the landslip which created a dam across the Wangapeka River in October 2012. Note: trampers should move quickly, following the marked route and, if possible, use a spotter to watch for falling rocks. In heavy rainfall, trampers downstream of the dam should move to at least 20 m above the Wangapeka riverbed level if they see the water suddenly becoming discoloured. The track continues along the true right of the Wangapeka River to the junction of Kiwi Stream, cross the bridge to the true left and continue for 30 minutes to Kings Creek Hut.

From this junction, trampers can do a side trip to Kiwi Saddle Hut (4 hr). Cross the Wangapeka River and Kiwi Stream bridges and follow the track on the true left up to the hut. This allows good access to explore Mount Patriarch and the Luna Tops in fair weather.

The restored Cecil Kings Hut is 5 min further up the maintrack from Kings Creek Hut. There are good, sunny camping sites near the river here.

The track continues to climb steadily alongside the gradually narrowing Wangapeka River, to a bridge half an hour before Stone Hut. There are good camping sites at the hut.

This section is classified as a route – suitable for people with a high level of backcountry (remote area) skills and experience. Navigation and survival skills are required. Find out more about track categories.

The route crosses a huge slip, then climbs steeply to Wangapeka Saddle (1,009 m), where the route over the spectacular Biggs Tops to Trevor Carter Hut begins (see below).

From the saddle the route descends on a gentle grade, fording Chime Creek or (if it is in flood) crossing by a walkwire 100 m upstream. It continues down to the Karamea river bed, crosses the river and proceeds down the true left bank. There are two more crossings of the Karamea, but if the river is in flood, fording can be avoided by a signposted diversion (an extra 20 min). Other unbridged side creeks may be impossible to cross after heavy rain.

The route soon arrives at Waters Creek, just before Helicopter Flat Hut. If the creek is in high flood there is another walkwire crossing 30 m upstream.

At Wangapeka Saddle a route leads over Biggs Tops and heads steeply down to Trevor Carter Hut. From here there are three ways to get back on the main route: Lost Valley Track to Helicopter Flat Hut; Saxon Falls Track, rejoining near Tabernacle lookout; or across the Karamea and along its true left bank to Taipo footbridge.

The route follows the Karamea River and sidles through bush to the Tabernacle lookout above, where the river drops away over Saxon Falls. It then continues and drops down to the Taipo footbridge. From the bridge, the route climbs steadily beside Taipo River for several kilometres to Taipo Hut. There are good camping sites below the helicopter pad.

The route gradually gets steeper towards Stag Flat Bivvy which is adjacent to the route. From the bivvy the route winds steeply up to the Little Wanganui Saddle, the highest point on the route (1,087 m); snow can be a problem here during winter. It then passes Saddle Lakes and drops steeply to the Little Wanganui River. Just prior to crossing to the true right via a swing bridge, a signposted side-track leads to Little Wanganui Gorge Shelter, 150 m from the main track. After crossing the swing bridge the route continues to Tangent Creek, then climbs above the river and sidles around the gorge, returning to the river at Smith Creek. A little further downstream the route leads directly to Belltown Manunui Hut.

After leaving the hut and crossing Drain Creek just metres downstream from the hut, the route continues for another 2 km, crosses the Lawrence Stream swing bridge, then passes over a large grassy clearing known as Gilmor Clearing. The route then heads away from the river, following an old access road for approximately 3 km before heading back toward the Little Wanganui River. It is a further 4 km to the end of the route at the Wangapeka Road car park.

The section of route between the Little Wanganui Saddle and Wangapeka road-end is often the most affected by adverse weather. Due to damaging cyclones in 2014, 2015 and 2018 expect windfallen trees and slips which can be difficult to negotiate, users should be fit and experienced to deal with these conditions, and take care when crossing damaged areas. Note: These slips also affect the Leslie/Karamea Track as it shares two entry/exit points with the Wangapeka.

Caution required on the Dart River ford: Due to ongoing gravel migration filling the ford, the river is flowing over the ford even at low water levels. Be cautious and assess the flow before driving across the ford. The ford may be impassable after heavy rain. 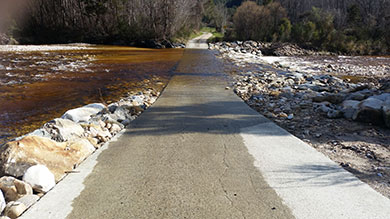 If you’re planning to cross the Dart Ford by vehicle, identify suitable conditions by checking the river flow for Wangapeka at Walter Peak on the Tasman  District Council website before you set off.

As a guide, if the flow indicated on the graph exceeds 40 cumecs then it is not advisable to cross.  However, the river may still be unsafe to cross because:

So you must re-assess the flow conditions once you arrive in terms of your vehicle and driving skill level. Don’t forget to check the weather forecast for your return trip too.

From Tapawera (62 km from Nelson), follow the signposts west to the Wangapeka valley. On the Wangapeka River junction with Dart River is a concrete ford. The river may flow over the ford, even at low water levels, and can become impassable after heavyrain. Cross the ford and continue 7 km up the valley to Prices clearing, where there is an information kiosk, public telephone (free dialling to Nelson) and intentions book. The track starts 1 km further on at the Rolling River car park.

This gravel road is not suitable for caravans or campervans.

From the West Coast road, turn off at Little Wanganui (80 km north of Westport, 18 km south of Karamea) and drive inland for 5 km on Wangapeka Road to the car park, where the track begins.

Most of the Wangapeka route winds through forest. In the damp understorey of the dense red and silver beech forest, double crepe fern (also known as Prince of Wales feathers fern) and kiwakiwa ferns are abundant among the carpet of mosses and lichens.

Gold was discovered in the Wangapeka valley in 1859. This discovery, and the need for access to the West Coast, led to the building ofthe route between 1862 and 1899 by unemployed gold miners and diggers.

Although the area attracted gold hunters for about 70 years, few fortunes were made. The first pastoral licence for sheep grazing inthe Wangapeka valley was granted in 1851. By the late 1860s, sheep had reached the alpine grasslands of the Wangapeka tops. Graziers tied small sack-bagsof grass seed to the sheep’s necks during summer, thus introducing new grass species to the area. Grazing attempts were abandoned after 1940 because of fierce competition for feed from deer.

The 1929 Murchison earthquake caused severe damage to sections of the Wangapeka Route.  These sections were rebuilt during the 1930s depression when the Government introduced a gold-mining subsidy scheme for unemployed men. Cecil Kings Hut is a relic of this time.