What sustains their lifestyles? 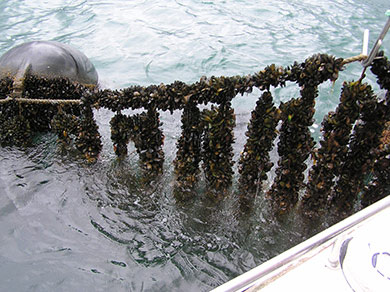 Mussel line on which spat are grown into mussels
Image: DOC

Congratulations! You have reached the highest point on the Queen Charlotte Track at 407 metres above sea level.

This private land section of the Queen Charlotte Track has been named Shamrock Ridge by the landowners. Why, no one is quite sure, but perhaps good luck has something to do with it.

One local industry most visible within Kenepuru Sound, especially from up here, is mussel farming. In many bays you can see lines of mussel buoys on the surface of the water – but not in Queen Charlotte Sound/Tōtaranui where marine farming is restricted.

Under each plastic buoy in the Kenepuru Sound mussel farms dangles a rope line, on which spat is grown into green-shelled mussels.

Mussel farming was considered to be green gold when it first started in the early 1970s. It started as small family-owned enterprises at a time when New Zealand's meat market was declining and the Auckland mussel market had collapsed.

Today's mussel industry is the second-largest industry in Marlborough with over 500 farms in total. It is largely owned by corporate interests, produces 70% of the national total, employs over 1,500 fulltime staff and is heavily regulated within the Marlborough Sounds.

Balancing the scenic and tourist jewel in Marlborough's crown with a highly visual, marine industry is an on-going challenge. Resource consents have a limited tenure that allows for a reassessment of environmental effects.