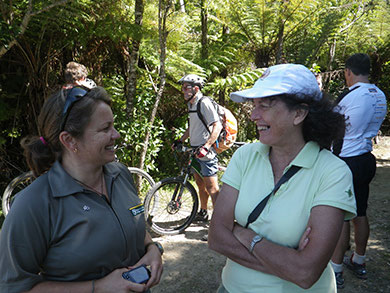 Private landowners and DOC worked together for many years to create the Queen Charlotte Track.

Initiated by the Lands and Survey Department in the 1980s, the multi-day track for all New Zealanders is today a joint project between DOC and the Queen Charlotte Track Land Cooperative (Q.C.T.L.C.), assisted by the Marlborough District Council and the local tourist board.

Back in the 1980s, old bridle tracks at both ends of the track had been reopened as popular walks, but they were not joined along the Kenepuru Ridge.

Private landowners pitched in to help form a new, ridgeline track that opened in 1983 as the Kenepuru Walkway.

Despite parts of the track being closed due to a change in Government policy, some landowners continued to maintain sections through their land.

Following major clearance and realignment work, the track was officially opened in 1991. Since then private landowners have made their land available for the Queen Charlotte Track.

Q.C.T.L.C. was formally established in 2010 to help ensure the sustainability of the Track.