The place of the big tōtara. 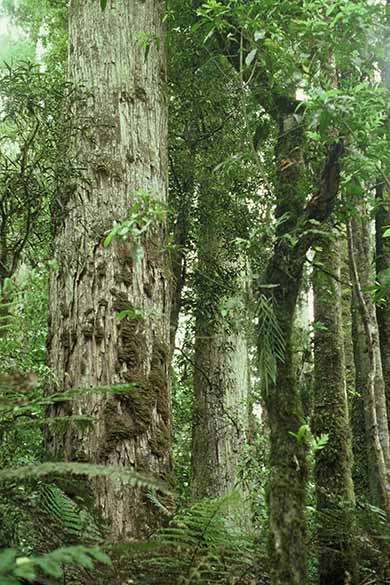 A tōtara forest has been planted on private land at Endeavour Inlet, by the Hellstrom family. They sourced seed from tōtara growing at nearby Titirangi. It will be many decades before the trees reach the size of the ones in this photograph.
Image: DOC

You have arrived at Grove Arm Viewpoint. If you look into the distance to the head of Grove Arm, you will see farmland. This fertile land was once covered in huge tōtara trees.

Tōtara trees were scattered throughout Queen Charlotte Sound/Tōtaranui, in pockets of fertile and free draining soils.

The isthmus of land between the waterways of Grove Arm and Mahakipaoa Arm, known today as Linkwater, was covered in tōtara. They were the gold of the forest, especially the huge ones.

Tōtara was, and still is, highly prized for the strength and longevity of its timber – natural oils that resist rot, a straight grain and a lighter weight than other native timbers.

Given that waka/Māori canoes took over a year to make using stone tools, it is not surprising that the shelter of Tōtaranui was a sought-after place for building waka. With a close supply of tōtara, the calm waterway of the Grove Arm would have been highly sought after.

During early colonial times, two fortified Māori kāinga/villages dominated the Grove Arm. One was Anakiwa, occupied by the Ngāti Rahiri hapu of Te Atiawa. The other Ngakuta Bay. There was a small settlement at Moumourangi/ Momorangi Bay.