Molesworth is a spectacular and iconic high county reserve with a rich farming history. The area is also home to the Historic Acheron Accommodation House and the Historic Molesworth Cob Homestead.

In New Zealand, the name Molesworth evokes the nation's high-country farming identity– musterers and stockmen and their dogs working livestock in vast tussock landscapes. It may seem isolated, but it has a long human history.

Established trails through Molesworth were used by Ngai Tahu Maori for food gathering and access between the west coast - an important source of jade (pounamu) - and the east coast. Maori described these routes to early European settlers, who well into the 20th century droved their stock over Molesworth's high passes from Marlborough and Nelson to Canterbury.

From the 1850s the main inland route between Nelson/Marlborough and North Canterbury ran through the heart of Molesworth. The old cob accommodation houses at Tophouse, Rainbow, Tarndale and Acheron are reminders of this. The stock routes never subsequently became public roads and throughout most of the 20th Century, Molesworth remained terra incognita to the vast majority of New Zealanders.

Molesworth today is an amalgamation of four separate pastoral leases - Molesworth, Tarndale, St Helens and Dillon - abandoned to the Crown between 1938 and 1949 because of rabbit infestation, stock losses in disastrous snowfalls, and economic recession. Molesworth has remained in Crown ownership and gradually recovered from its earlier desolation, thanks to extensive rabbit control and over-sowing of some 37,000 ha in the 1950s and 60s.

Today up to 10.000 cattle graze on lands that almost a century ago were being reduced to a desert by millions of rabbits and 90,000 sheep. Over the years Molesworth has developed an almost mythical status. The initial opening of the road through Molesworth as a toll road in 1988, attracted 3300 people. In 2005 the toll was removed and the road is now open for several months during the summer. Its transformation into a recreation reserve has opened up more opportunities for people to experience this remote area.

The farm calendar follows the cycle of the seasons, with cattle grazed on warm valley floors in the cold winter months then ranging free on the higher altitude back-country during summer. Teams of musterers camp out with their dogs and horses for days at a time in remote huts.

Lower slopes and valley floors have been aerially oversown and topdressed with fertiliser.

Briar, broom and wilding pines and the invasive flatweed, hieracium are problem weeds. Possums, ferrets and pigs are a significant threat to animal health because of their ability to transmit bovine tuberculosis, which is present on Molesworth.

Molesworth working mares and their foals

Read stories from the interpretation panels located on Molesworth.

The valleys of the Awatere, Waiautoa (Clarence) and Wairau Rivers, their tributaries and linking passes, were known and used by Māori.

Historically the area was visited by small food-gathering parties in times of abundance, generally every 3-5 years. This seasonal activity complemented the well developed coastal economy of early Māori.

The lack of evidence of permanent Māori settlement and its associated sites is thought to reflect the short term seasonal visits, generally in the summer months.

In 1850 the explorers Edwin Dashwood and Captain W. M. Mitchell found the remains of an old Māori whare and a heap of firewood near the junction of the Acheron and the Clarence. 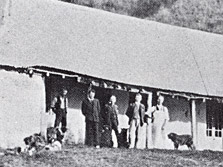 In 1852 Robert Godley opened the Canterbury Plains to sheep farming. Fortunately for the prospective pastoralists, Marlborough was overstocked with sheep. The cheapest way to stock the plains was to move sheep overland from Marlborough to Canterbury.

The first stock route was over Barefell Pass, until 1855, when a better route was discovered through the upper Wairau River valley. These two routes converged on the Acheron Valley. The site above its junction with the Clarence River became strategic to the whole droving business.

With the exception of a house at Culverden in the early 1860s, there was no accommodation between the ‘Tophouse’ at the head of the Wairau Valley and ‘Hasties’, south of the Hurunui River.

Travellers demanded that the area be provided with accommodation houses.

In 1862 the Provincial Council paid three hundred pounds to the licensee, Thomas Carter, for a ‘House of Accommodation, Acheron Valley’. The license required that the house be kept open for eight months of the year between September and April.

Carter was also granted grazing rights over a reserve of 2650 acres.

The same year Carter employed Ned James, a well-known builder of cob buildings, to construct the accommodation house. Ned was a ship carpenter and station hand. He took nearly all of 1863 to build the house which contained eight rooms, including bunk rooms. At some stage, a privy was added to the north end of the verandah.

The charge for a meal, a bed and stabling for horses, was two shillings and sixpence per night. Hot bread baked in the large brick oven was a feature of the accommodation.

Carter remained at the accommodation house until it was taken over during the 1880s by John and Mary Lunn. By 1889 it was occupied by Gilbert Gordon and his family.

The accommodation house soon became a centre for social activity. It housed the store and unofficial post office, race meetings, pigeon shoots, dog trials and the rifle club. There was always room for one more traveller; if not on the billiard table, then on the floor underneath it.

The accommodation license continued until 1932 when Ernie Tozier, who had held the license for about thirty years, died.

Following Tozier’s death, the house became an outstation of St. Helen’s Station and was used irregularly by musterers. When St. Helen’s became part of Molesworth and crown land, it was used by station staff. It was finally abandoned in 1954 when Molesworth shifted its headquarters to Bush Gully.

Between the 1950s and 1970s, the building deteriorated, and demolition was considered. On the initiative of the Canterbury Branch Committee of the New Zealand Historic Places Trust and the former Lands and Survey Department, the restoration of the building was begun.

A new corrugated iron roof was added to protect the cob walls. The ceilings in some of the rooms have been lined.

The Historic Places Trust and the Department of Conservation continue to restore and maintain the building. An annual workday sees staff and volunteers clearing the grass around the building, cleaning out the interior, lime-washing the exterior, painting the windows and doors and possum proofing the interior.

Possums are a nuisance as they claw away the protective wire netting, and scrabble at the cob walls, leaving the exposed cob vulnerable to the weather.

Cob buildings were common during the nineteenth century. Cob was a good alternative when timber was scarce. It was also a viable building material in its own right, as the earth walls of a cob building kept the interior cool in summer and warm in winter.

The first steps in the construction of a cob building, like Acheron, was to dig a trench the size of the building. This was filled with stones which became the dry foundation on which the cob wall sat.

The walls were then constructed by working around the entire perimeter, increasing the height by about 30cm per day. The whole wall couldn't be built at once, as the cob shrank as it dried. When the building was completed the exterior was lime-washed to further protect it from the weather.

The cob mixture for the Acheron Accommodation House was made from local clay, tussock, animal dung and water.

The roof covering was a tussock thatch supported on 120 black beech beams. The beams were cut from beech trees in Bush Gully.

An old saying was that a cob house 'must have a good hat and dry feet.' The stone foundation was the dry feet, and the snow tussock thatched roof the good hat.

The high quality of the construction is proven by the fact that the building still stands more than 140 years later.

For topographical maps or information on the Molesworth Road contact the Wairau / Renwick DOC Office or the Hurunui Visitor Centre.

You can visit the Molesworth Cob Homestead, which was the first homestead on what was to become New Zealand's largest pastoral run. This was the original Molesworth homestead built as a one-roomed hut by the third runholder John (Cornelius) Murphy in 1866 and later extended by his successor William Atkinson.

Murphy was the first runholder to over winter which he later described "as a sort of Esquimaux’s life; we were shut up sometimes for four or five weeks". This building remained the homestead until 1885 when the present, larger, cob homestead was built. This original cottage was then used to accommodate musterers and rabbiters. Historic themes are pastoralism, animal pests and farming.

The first homestead on what was to become New Zealand’s largest pastoral run. A strong reminder of the limitations and privations of life in inland Marlborough last century. The cottage has a category two Historic Places Registration.

A two-roomed cob house each room with separate doorways on the eastern side opening to a low veranda (you have to stoop to enter). There is a robust cob chimney at either end of the building. The cob exterior is limewashed. The roof and veranda are corrugated iron with a skylight (1950s?). The internal partition is wooden, also probably 1950 era. The fireplaces are large and open but no longer allowed to be used. The floor is concrete in the western end, timber in the east.

Most of the chattels are comparatively recent including two wooden beds a table and benches. However, there are also a few (secured) old artefacts Some repairs were carried out by the Marlborough Historical Society in the early 1980s and DOC did further remedial work in 1994/95.

The cottage sits on the edge of the Molesworth road on a grassed terrace above the Molesworth Stream. Groves of cork elms and poplars around it were originally planted for shelter and fuel. There is archaeological evidence of other buildings once associated with the homestead to the north along the terrace. 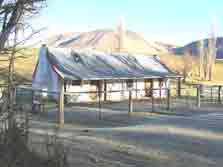 A good sound example of an early and modest cob building once common on the pastoral runs of Nelson and Marlborough.

Continue as a historic building and tourist attraction. The cottage will be maintained to protect its historic fabric and minimise deterioration. A conservation plan has been prepared (Ian Bowman, 1993) to guide its management, this contains more information about the hut.

Camp by this historic cobb building from 1863, once used as an overnight carriage stop.

Between Labour weekend and early April, you can drive through Molesworth Recreation Reserve on the Acheron Road. No caravans or vehicles over 7 m long, and you need a permit to tow a trailer.

Welcome to Molesworth Station. Watch this video to find out more about this historic station in the Marlborough region.