Whio on a rock in river
Image: Neil Hutton | ©

The story of Whirinaki whio is as old as the 800-year-old podocarp trees which the Whirinaki Forest is famous for.

The Whirinaki te Pua a Tāne Conservation Park is a 65,000-ha old-growth forest full of fast-flowing, clear rivers and streams and perfect for whio.

Blue duck/whio are endemic to New Zealand. They depend on fast flowing clean rivers surrounded by native vegetation to survive. However, because of issues like habitat loss and vulnerability to introduced predators, whio are a threatened species.

Surveys in the Whirinaki Forest indicated that, although habitat loss was not an issue, whio were not flourishing. 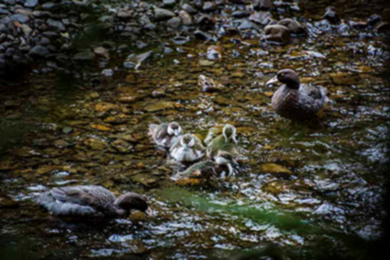 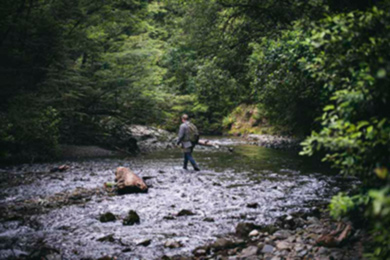 Nationwide monitoring showed that stoats were the number one cause of the decline, with a 90% of whio nests and 46% of females lost while sitting on the nests outside managed areas in Aotearoa. The story of Whirinaki whio was looking like it might be coming to an end. Enter Genesis.

Genesis and DOC have partnered as 'Whio Forever'. This five-year programme will implement a national recovery plan to protect whio breeding areas and habitat. It focuses on eight ‘Security Sites’ in Aotearoa. The Whirinaki Forest is one of the most important of these sites.

The support of Genesis is enabling DOC to double the number of fully secure whio breeding sites throughout the country, boost pest control efforts and enhance productivity and survival for these rare native ducks. 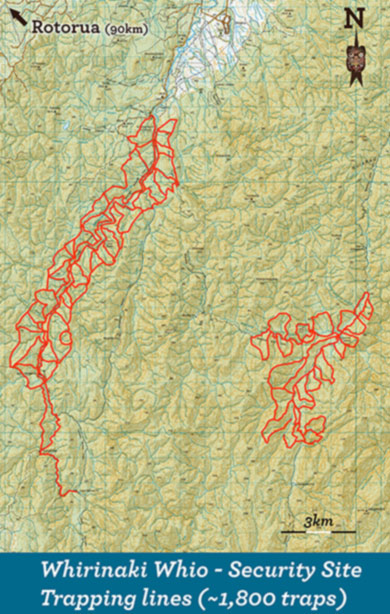 The site was established in 2011 when 420 traps were installed around the Whirinaki River. The initial goal was to protect 50 pairs of whio.

Whio pair numbers have consistently been surveyed on a 17 km stretch of the Whirinaki River. In the years prior to 2011, whio pair numbers had kept to an average of 16 pairs over the 17 km of river. The last full conservation dog census in 2016 recorded 33 whio pairs living on the same length of Whirinaki River. As the Whirinaki River whio population builds and reaches capacity, whio will spread out and move into side streams and neighbouring watersheds further increasing the forest’s overall population.

With a strong trap regime in place and the steady increase in the Whirinaki whio population, Genesis funded an expansion of the site to include a whole new area in the park in 2016. Two streams were identified as promising additions to the site: the Moerangi and the Mangakahika. Both streams had whio pairs all along them; however, a whio survey conducted during the 2015/16 breeding season using conservation dog teams found zero ducklings present.

New traplines were installed along both the streams during the early months of 2016. In the first few weeks 30 stoats were caught in just 50 traps. Following on from the trapping efforts 12 whio pairs were monitored over the 2016/17 breeding season. They produced 20 ducklings between them, 15 of whom fledged.

Battle for our Birds operation

During October/November in 2017 the Whirinaki benefitted from a Battle for Our Birds operation. 38,000 hectares received pest control through aerial application of 1080. Once again, there was a marked improvement in whio duckling numbers and fledgling rates.

Future of whio in the Whirinaki

The Whirinaki whio Security Site has expanded and is continuing to expand thanks to Genesis. The trapping networks set up currently cover onwards of 3800 ha and approximately 60 km of waterways. The initial goal of protecting 50 whio pairs is well in sight. The last full dog survey recorded 48 whio pairs and it is anticipated that the next full survey will be celebration time.

If the only whio you’ve seen is on the front of a $10 dollar note, the Whirinaki is a great place to look for whio. The Whirinaki Track and the Moerangi Track are both ‘easy tramping’ tracks which follow the waterways and provide numerous whio spotting opportunities. Though often it is the whio who do the spotting; and will call out with their high-pitched whistle warnings as walkers approach.

Thanks to the work of DOC and Genesis, the whistle of Whirinaki whio won’t disappear from the forest.