An impressive pa once stood on the narrow rocky headland that juts out into Whitianga Harbour. 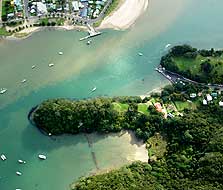 Aerial photo of Whitianga Rock and the kauri boom 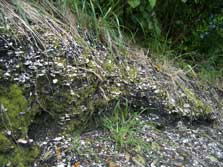 Exposed midden along the side of the track 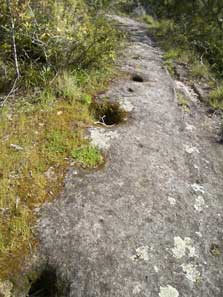 Depressions cut into the rock mark where posts stood

An impressive pa once stood on the narrow rocky headland that juts out into Whitianga Harbour. A well fortified Ngati Hei stronghold; rock bluffs and water provided natural defences on three sides while ditches, earth banks and scarps protected the pa on the landward side. Despite the defences, in the mid eighteenth century it was ransacked by a war party of Ngai te Rangi.

Although long burnt and abandoned when Captain James Cook visited Whitianga Rock in November 1769, he was greatly impressed by the pa noting its strong defences and strategic position. When Cook visited the pa on 11th November 1769 he wrote:

“A little with[in] the entrance of the river on the East side is a high point or peninsula jutting out into the River on which are the remains of one of their Fortified towns,  the Situation is such that the best Engineer in Europe could not have choose’d a better for a small number of men to defend themselves against a greater, it is strong by nature and made more so by Art”

Several physical features of the pa are still visible. A short track through pohutukawa bush passes through the ditch and over terraces where houses, cooking shelters, fireplaces and pits for storing crops would have been built. Depressions cut into the rock mark where posts stood. Along the track large areas of midden lay exposed indicating shellfish was an important food source.

At the top of the headland you will be rewarded with spectacular views of Mercury Bay and Whitianga Harbour.

At low tide the remains of a stone structure can be seen at Back Beach. The stone which once formed the high defensive walls on the pa was reused to build a kauri boom. Used to collect logs for transport, this boom dates from the 1880s when kauri logging expanded in the area.

A short walking track from Ferry Landing Wharf leads into Whitianga Rock Scenic and Historic Reserve where you can visit the remains of a pa site.