Dr Dedual was invited by the Taupō Fishing Club in July to speak about recent research findings, including a major piece of work focussed on Lake Otamangakau (Lake O).

Recent angler reports of dead trout sighted at Lake O during hot, dry summer conditions was a real concern for the Taupō fishery team. We know from research carried out by international colleagues that warm water with low dissolved oxygen is a lethal combination for trout (>20ᵒC is the key figure).

Such warm conditions are not unusual at the surface of Lake O, particularly during dry hot summers when cool water flowing into the lake from the western diversion of the Tongariro Power Scheme is reduced. However, water temperature is not uniform throughout the water column. Cooler temperatures are found in deeper parts of the lake which normally provide sanctuary for trout, even during extended hot weather. So, what is causing the recent increase in trout deaths and what can we do about it?

To better understand exactly what is going on at Lake O we introduced monitoring equipment to record temperature and dissolved oxygen levels at varying depths and locations within the lake. In addition, we set up an automated monitoring system to quantify angling pressure. Finally, we ran a ‘catch-and-release’ survival study to capture the impact of this increasingly popular fishing approach. The results from this work were also combined with results from regular ongoing angler surveys and previous spawning trap data.

Before we consider the results from recent studies it’s valuable to look back at previous work and consider what we already know.

Ongoing angler surveys tell us that voluntary catch-and-release has become increasingly popular, particularly at Lake O. In recent years between 80% and 90% of anglers adopted this approach at Lake O compared to an average of 60% to 70% in Taupō rivers and approximately 30% in Lake Taupō.

From spawning trap data gathered between 1995 and 2013 we know the trout population size in Lake O has increased significantly over time. Over the same period the number of very large trout decreased. For example, in 1996 there were 92 fish over 4kg recorded in the fish trap - which equates to 12% of the spawning run. By 2009 that figure was down to 1 fish over 4kgs and 0.03% of the run. As expected, the increased trout population resulted in a higher catch rate for anglers but the chances of hooking a very large fish (over 4kgs) diminished.

Key results from the study

Our latest studies confirmed Lake O receives very heavy angling pressure - from October 2019 to March 2020 it received 2,487 visits representing 13.8 angler days/hectare. As a comparison Lake Taupō is estimated to receive only 1.1 angler days/hectare. The distribution of angling pressure at Lake O is also a concern, with the largest concentration of angler visits coinciding with the warmest weather in January.

The catch-and-release investigation gave a clear indication that warm surface water has a considerable impact on trout survival rates at Lake O. The early season sample, which was collected during cooler water conditions in November, delivered a 100% trout survival rate. The later sample collected during hot summer conditions in February/March revealed a mortality rate of around 30%. The graph (figure 1) captures this information along with key environmental conditions. 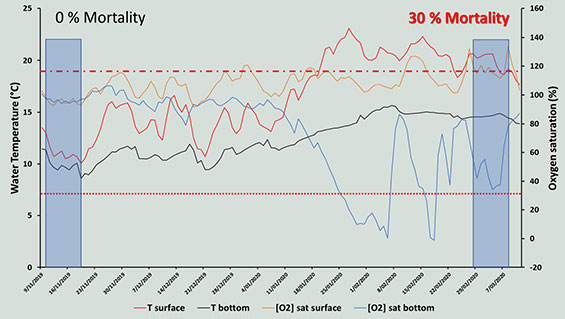 Any potential changes to the Taupō fishery regulations must be based on robust evidence. The combination of our own primary data collected at Lake O and the data generated by other members of the scientific community, provides a firm platform for change.

Water temperatures above 20ᵒC and the associated drop in dissolved oxygen levels can easily kill trout. Under these warm conditions catching and releasing a trout at Lake O effectively draws the fish away from the safety of cooler water, into the dangerous conditions found near the surface. Approximately 1 in 3 of these fish will die. High angler pressure encountered during warm water conditions in January and February adds to the problem.

Some form of restriction on fishing is required to protect trout at Lake O when surface water temperature exceeds 20ᵒC. We are currently evaluating options. From a technical perspective we are looking at modelling that considers environmental conditions, angling pressure, catch rates, and potential trout mortality. We are also mindful of the angling community and want to ensure any changes are fair and enhance the long-term recreational fishing opportunities at this venue.

A draft management plan for Lake Otamangakau will be generated and shared with the Taupō Fishery Advisory Committee (TFAC) - made up of representatives from a cross section of angler interest groups and fishery stakeholders. Feedback will be sought in response to the draft management plan.